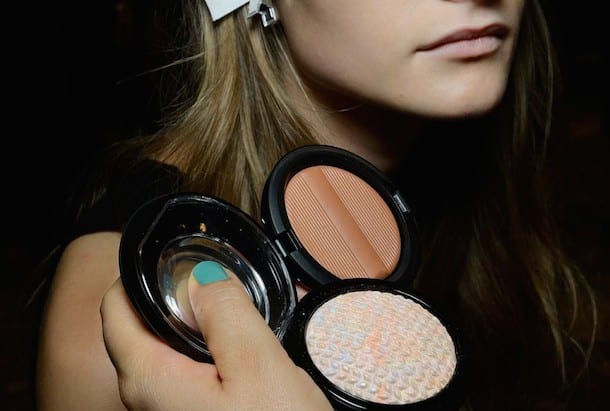 The fashion week whirlwind whizzed by quicker than you could say Cara Delevigne. But left in its wake was a trail of inspiring new beauty looks (ranging from the beautiful to the barbaric) that are destined to stay.

But the real trends of the day are waiting for you – peruse our gallery at your pleasure.

It was a tale of contradictions for our blessed skin this season. On the one hand, matte powder has cemented its role as one of Spring/Summer’s biggest trends, seen at the likes of Prabal Gurung, Ralph Lauren and Christian Dior. Yet dewy skin was (quite literally) highlighted at Marc by Marc Jacobs where gloss was applied to the cheeks and at Thakoon where it was applied to the lids.

Take your pick – either up the sex appeal with larger than life waves à la Diane Von Furstenberg or let a carefree ripples fall like the models at Jonathan Saunders, Narciso Rodriguez and Mulberry. Whatever you do, just make sure there is some serious kink – waves were certainly the hair du jour.

Cheeks were bolder than we’ve seen at previous seasons – think more nineties Vogue covers than Spring/Summer 2014’s all over outdoorsy flush. But fear not, the peachy glow is far more wearable than you might think – Pat McGrath supplied a dusting of rosy shimmer at Versace and Ralph Lauren contrasted the peach with a pink pout, but it was Erdem’s fresh romanticism that really stole our hearts.

Forget smokey eyes. Tom Ford, Armani, Giles and Donna Karan made a wash of slate grey look so damn fabulous, that it we promise it will be as much as a staple as your trusty LBD. So sophisticated, so chic and so Spring/Summer 2015.

The love for grey travelled all the way down to the tips and toes. And it was Louboutin’s highly anticipated new polishes that were the order of the day. “Alta Perla is a sophisticated gray nude that goes with any skin tone,” explained Christian Louboutin Beauté Nail Consultant Madeline Poole. Clearly Julien MacDonald, Prabal Gurung, Creatures of the Wind and Peter Som agreed. That’s settled then – grey it is.

A veritable rainbow of berry lips was seen across the board – from red wine stained at Topshop Unique and Burberry to positively plum at Dolce and Gabbana. Just remember – lips are a stain, not a shine, so smudge out that liner and amp up the colour for the next season’s biggest beauty trend.

Yeah – yeah, bold and bushy, you’ve heard it all before. But this season it wasn’t just about volume – brows are getting creative. Prada filled them out, Givenchy and Alexander McQueen bleached them, and Rodarte pierced them with mutli-rings (or at least faked it). Honestly whatever will be next?