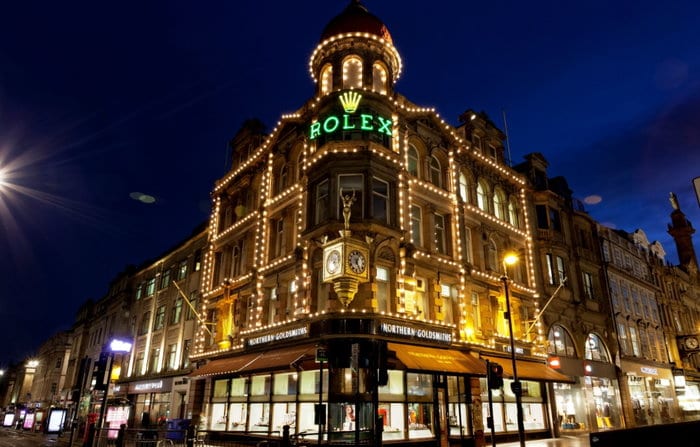 The showroom which crowns the corner of Pilgrim Street and Blackett Street has a rich heritage dating back to 1892, making it one of the most long-standing in the Goldsmiths’ estate.

Known for being lit up at night, historically Northern Goldsmiths was a place for revellers and lovers alike to meet. The chiming Rolex clock, adorned by the Golden Lady “Venus” with her outstretched arms symbolising progress and finished in 24ct. gold leaf, became synonymous with courting couples in the city.

It has since been the scene of many proposals and consequently earned itself the name ‘the kissing clock’. It is this tale that is fondly recalled in the jewellery brand’s UK-wide festive film.

Both the wider city and the property are presented in a 50 second clip featured on Goldsmiths’ website and across its social media channels to tell the story of ‘The Real Christmas’, which sits perfectly alongside the current ‘It starts with Goldsmiths’ campaign.

Goldsmiths director Craig Bolton said: “Our Northern Goldsmiths showroom at 1 Blackett Street has always been at the heart of the business as it has grown over the years and the image of the building lighting up the dark nights in winter is an idyllic Christmas setting, recognised by many.

“We wanted to bring this nostalgia to life in the short film and excite an audience beyond the region with the brand’s story which began in Newcastle – something we’re incredibly proud of.”

Starting life as a small family business founded by a Northumbrian called Thomas Cooke, Northern Goldsmiths once supplied Newcastle-made watches and marine chronometers to the Admiralty during the Great War from its workshop. Fighting through the austerities of post-war Britain, it is still renowned today as a leader in the luxury watchwear market.

2015 saw the showroom undergo a £1m investment to restore the flagship showroom to its former listed glory, marked by a celebration with customers, past and present employees and well-known local faces.

Stephen Patterson, Director of Communications at NE1 Ltd said: “Northern Goldsmiths has an iconic presence in Newcastle, never more so than at Christmas when its beautiful dome is lit with festive lights. Goldsmiths has been dear to the hearts of generations of North Easterners and it is no surprise to us that it features in the national Christmas campaign. It is only fitting that Newcastle’s elder statesman of jewellers is being feted across the UK.”

Goldsmiths is the UK’s largest luxury high street retailer with over 100 stores nationwide and online at goldsmiths.co.uk, and was the first official Rolex retailer in the country.

With over 230 years of experience and tradition, Goldsmiths sells fine jewellery and diamonds, including exclusive Jenny Packham and Canadian Ice collections and operates the largest distribution network for Rolex, Omega and TAG Heuer as well as many other reputable watch brands such as Michael Kors.