A library for the 21st century: The Word welcomes its millionth visitor 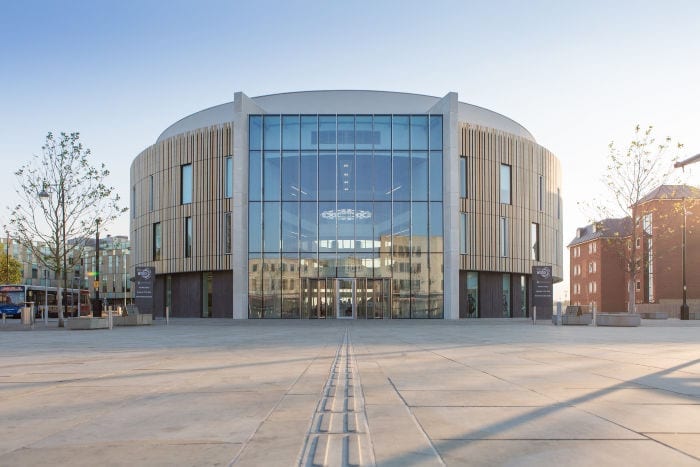 Despite the general doom and gloom surrounding libraries with closures and reduced spending on books reported in the North East region, one South Shields literary hub is bucking the trend.

The Word, National Centre for the Written Word, welcomed its millionth visitor over the bank holiday weekend.

Since it opened, in October 2016, people from across the world have headed to the South Shields venue, to borrow books, visit exhibitions and take part in a varied programme of events and workshops.

And over the Easter weekend visitor numbers hit the million mark – which proves the venue is achieving its aim; to be a top cultural venue and library for the 21st century.

“One million visitors was always a huge milestone for us,” said Tania Robinson, Head of Culture at The Word.

“That we reached it almost exactly when we had hoped to, shows that people from South Tyneside and beyond have really engaged with the venue and are inspired by what we are doing here.”

Built to celebrate the written word in all its forms, The Word’s lending library of more than 70,000 books has attracted visits from librarians from as far afield as New Zealand and The Netherlands.

Newly released figures also show there has been a 43.3 per cent increase of books issued by the South Tyneside Central Library since it moved to The Word from its former home at St George’s Square and 36 per cent more people are actively borrowing books.

But it is its ever-changing programme of exhibitions and displays which have given it wider appeal – from its hugely popular Monsters! The Good, the Bad and The Cuddly, to Cracked! Secret Codes and Communication.

Authors, playwrights and poets, from David Baddiel and Vera creator, Ann Cleeves, to crime queen Val McDermid and Michael Chaplin, have given talks and workshops while the annual, WRITE Festival, which celebrates words in all their forms and uses, will return to The Word, from Saturday 11 to Friday 24 May.

Another aim for The Word was to make creativity and words relevant to younger visitors, “and there is no doubt that our digital and design facilities have been instrumental in engaging visitors of all ages,” said Tania.

One of these facilities is FabLab @ The Word, which not only provides a creative space for budding product designers and entrepreneurs to test out ideas and bring them to life, but also gives them access to 3D printers, vinyl and laser cutters as part of a programme of workshops.

And OpenZone @ The Word supports schools by using technology to enhance learning and teaching.

With two state-of-the-art digital classrooms, a media studio and access to the FabLab, its team helps students and teachers develop a variety of cross-curricular projects from film-making and podcasting to animation and coding.

And, because the written word is often designed to be heard as well as read, The Word’s immersive and unique StoryWorld incorporates stunning backdrop projections and sound effects so families and children can lose themselves in the depths of a story.

“But all of this is just the tip of the iceberg,” said Tania. “People are always amazed by how much there is to see and do which is why so many make return visits.

“Now, it’s full steam ahead to welcome our next million visitors.”

The Word … in numbers

Read More »
December 15, 2021
PrevHave you read?Quayside Seaside will bring the beach fun back to Newcastle in May
Next read...Dreams can come true as legends turn out for music loversNext