A Stomping Great Return For The Bin Lid Kings 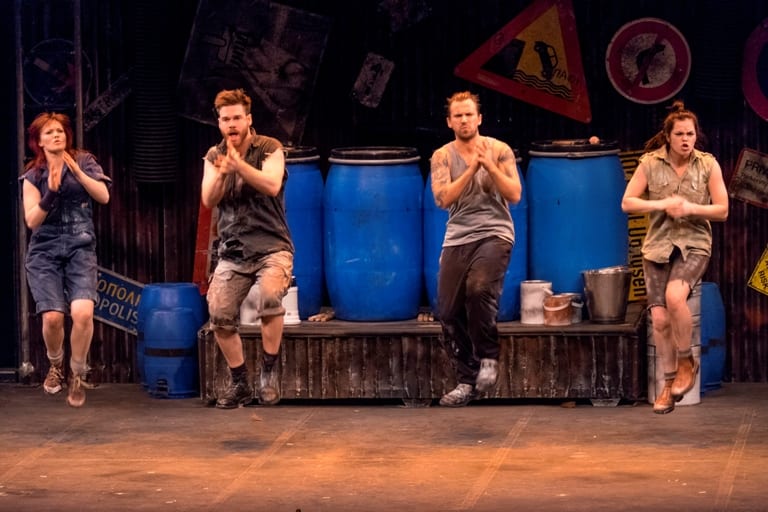 Fresher, faster and funnier than ever, the multi-award winning theatrical spectacle STOMP is set to make a return to Newcastle Theatre Royal for the first time in 15 years, and will be touching down for one week only 15-20 February 2016.

A unique combination of percussion, dance and comedy, Stomp is a stage spectacle in a genre of its own. Everyday objects like dustbin lids, matchboxes, brooms, cigarette lighters are transformed into musical instruments and props and the cast command the stage with an unprecedented energy and rhythm in order to ‘play’ them.

Now entering its 23rd year, this smash hit show has entertained over 15 million people across 50 countries worldwide; featured in a range of commercials, film soundtracks and TV collaborations and won multiple awards including an Obie, a Drama Desk Award and an Olivier.

The show was born in Brighton, UK, in the summer of 1991 as the result of a ten year collaboration between street theatre artists Luke Cresswell and Steve McNicholas. From acclaimed performances at the Edinburgh Fringe to large outdoor events, the legend of Stomp grew in ambition and scope, gaining legions of fans along the way and becoming the theatrical sensation it is today.

The creators and co-directors have ultimately developed a unique, universal language of rhythm, theatre, comedy and dance, which has become a true phenomenon.

Since their last visit to Newcastle in 2000, the Stomp cast have performed in the closing ceremony at the 2012 Olympics and have introduced two new pieces to the show: Frogs and Trolleys.

Trolleys taps into the everyday experience of negotiating a busy shopping aisle with a fully laden supermarket trolley but soon transforms into the closest the show will ever get to drum corps. It is also the first fully fledged Stomp routine to be performed entirely in 5/4 time signature.

Frogs explores the bizarre sonic possibilities of a variety of plumbing fixtures! It has to be heard to be believed, but close your eyes and this piece sounds unlike anything ever heard in the show till now. Organic, quirky and plumbing new heights.

Creators Luke Cresswell and Steve McNicholas are both very happy with the way the new pieces have slotted in, each with Stomp’s trademark exploration of sound, movement and physical humour and there’s more to come: they will be working on more new routines later this year.

Still remaining is Stomp’s signature high-octane meeting of slick choreography, tight ensemble work, industrial percussion and a narrative of anarchic clowning; as the irrepressible troupe of eight turn brooms into soft shoe partners, clapping into intricate conversations and water cooler bottles into sophisticated instruments. A row of folding chairs are straddled, slid, slammed and slapped into rhythmic submission. It is at once primal and urbane, leaving no percussive potential – of object, body or action – unexploited. And all underpinned by a childish delight in making serious noise.

The whole show hurtles towards a brilliantly reworked climax – a showstopper in every sense – as a crackling carnival of leaping, spinning, skidding and pounding performers vent their inexhaustible energies on an unsuspecting orchestra of metal dustbins, bin lids, tubs and water butts. Joyous, thumping, exhilarating bliss for all involved … except the bins!

WHERE & WHEN
Stomp comes to Newcastle Theatre Royal Mon 15 – Sat 20 Feb 2016 to celebrate over 20 astonishing years of foot stamping, finger drumming, and adrenalin rushing joy across the globe. It plays evenings at 7.30pm, matinees on Thurs 2pm and Sat 2.30pm.

TICKETS
Tickets from £13.00. Tickets can be purchased online at: www.theatreroyal.co.uk or from the Theatre Royal Box Office on 08448 11 21 21 (Calls cost 7pm plus your phone company’s access charge.)