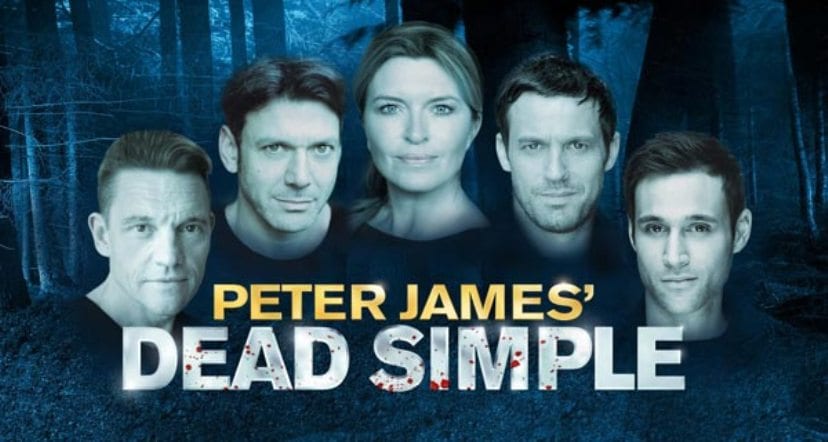 Soap heartthrob Jamie Lomas is making the most of starring on stage in the UK’s stag do capital, Newcastle, to explore some of its most famous bachelor party haunts with his fellow cast members. Dead Simple – a thriller concerning a stag-do gone wrong, is playing all week at Newcastle Theatre Royal.

The award-winning actor will be familiar to soap fans as EastEnders’ murderous Jake Stone and before that bad boy Warren Fox from Channel 4’s Hollyoaks.

Based on the best-selling novel by Peter James, Dead Simple sees Jamie, who plays groom Michael Harrison, buried in a coffin with everyone who knows his whereabouts dead. Everyone but one person… and Detective Roy Grace must race against the clock to find that person and rescue the victim before it’s too late!

Jamie stars alongside Tina Hobley, who returns to the stage having graced TV screens for the last 12 years as ward sister Chrissie Williams in the BBC 1’s Holby City as well as roles in Coronation Street and Harbour Lights before that and was seen earlier this year in Celebrity Master Chef. She currently presents the prime time Sunday morning programme on Smooth Radio.

The role of the famous Detective Roy Grace is played by Gray O’Brien, the award-winning star of Coronation Street, TV series Titanic, Peak Practice and Casualty as well as Sleuth in the West End. He will follow up his critically acclaimed performance in previous Peter James adaptation, The Perfect Murder, by playing the detective in this gripping, chilling, thriller that has all the classic suspense, twists and turns of a best-selling Peter James novel.

Peter James has gone straight in at number one in the Sunday Times bestseller charts seven times in the last four years with his Roy Grace series. The international bestselling crime thriller novelist has won numerous awards both in the UK and in the USA, Peter has sold over 15 million books of his Roy Grace series, and is published in 36 languages. Dead Simple has itself sold over 2 million copies around the word and has been a number one best seller in the UK, Germany, Italy, France, Holland and Russia

Dead Simple is the second of James’ novels to be adapted for the stage and Peter said: “From the age of eight, when my parents first took me to the Theatre Royal in Brighton, it had been my dream that one day the curtains would rise in a theatre and a play of my work would be performed. That dream came true after a chance meeting with my old friend, producer, Joshua Andrews, at a party in November 2012.

“Josh had seen first-hand the success of the recent Agatha Christie stage productions and he joked that I was the nearest thing to a living modern day Agatha Christie – so he asked if I had any novels that I felt might adapt well to the stage. The result was the first run of The Perfect Murder, over 16 weeks from early January this year, and to my delight it played to packed houses, enthusiastic audiences and a great critical response around the country and has just started its second tour this autumn!

“It is a real thrill now for Josh and I to be launching our second collaboration, an adaptation by the brilliant Shaun McKenna, of my first Roy Grace novel, Dead Simple. It’s a tale of treachery and deceit, which seems to touch a nerve in everyone who reads it and has been one of my best-selling books to date.”

“I had myself locked in a coffin for 30 minutes as part of my research, and it was one of the scariest moments of my life. It’s so many people’s worst nightmare to be buried alive and I’m looking forward to recreating some of that terror in the theatres soon with another incredible cast of actors!”

Read More »
December 15, 2021
PrevHave you read?The evolution of gaming celebrated at Game on 2.0
Next read...Toon trio set to relive the last glory days of MagpiesNext