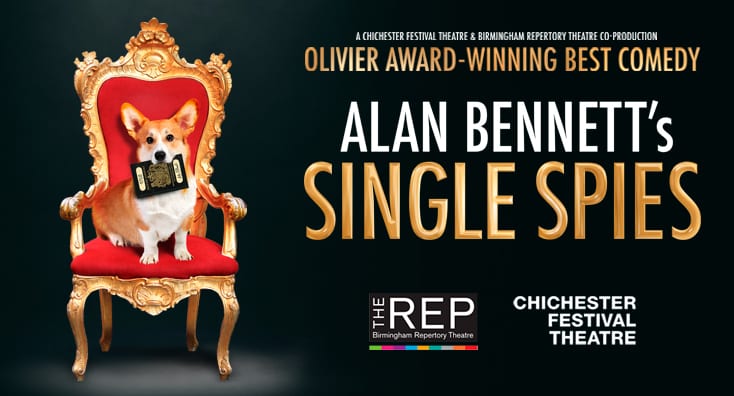 Bennett’s award-winning double bill is a pointedly satirical snapshot of two members of the infamous ‘Cambridge Five’, Guy Burgess and Anthony Blunt, both recruited as spies by the Soviet Union during World War II.

Following their success with The King’s Speech, the new production is a collaboration between Chichester Festival Theatre and Birmingham Repertory Theatre.

In 1950s Moscow, Coral Browne receives an invitation to lunch with shunned Soviet spy, Guy Burgess, with the sole instruction to ‘bring a tape measure’. An Englishman Abroad is a wry and touching play which chronicles the pair’s fleeting friendship and Burgess’ attempts to cling to his way of life as a Soviet citizen.

A Question of Attribution gives us a glimpse into Anthony Blunt’s life of espionage within the very walls of Buckingham Palace. Following his double-life as an art historian to royalty and a Soviet spy, this witty tale of forgery and deceit culminates in a sharp and candid interrogation from Her Majesty the Queen herself.

Single Spies premiered at the National Theatre in 1988, opening to critical acclaim and receiving an Olivier Award for Best New Comedy in 1990.

David Robb is currently on screen as Dr. Clarkson in the multi-award winning drama Downton Abbey (ITV) his extensive television credits also include Wolf Hall, Roman Mysteries and Garrow’s Law (all BBC). On stage he has recently appeared in The Audience (Apollo Theatre) and Hamlet (Tour & West End).

Rachel Kavanaugh was Artistic Director of Birmingham Repertory Theatre and has directed multiple celebrated productions at Regent’s Park Open Air Theatre including The Sound of Music (nominated for Best Musical Revival, Oliver Awards; winner of Best Musical Revival, WhatsOnStage Awards), Much Ado About Nothing and As You Like It. For Chichester Festival Theatre, Kavanaugh’s Love Story was Olivier Award-nominated for Best New Musical and received a West End transfer.

TICKETS
Tickets from £14.50 (save 50p per ticket online). Tickets can be purchased from the Theatre Royal Box Office on 08448 11 21 21 Calls cost 7ppm plus your phone company’s access charge or book online at: www.theatreroyal.co.uk

Read More »
December 15, 2021
PrevHave you read?Homebuying Just Got Better With Miller Homes
Next read...Prepare Homes Now For A Warmer WinterNext