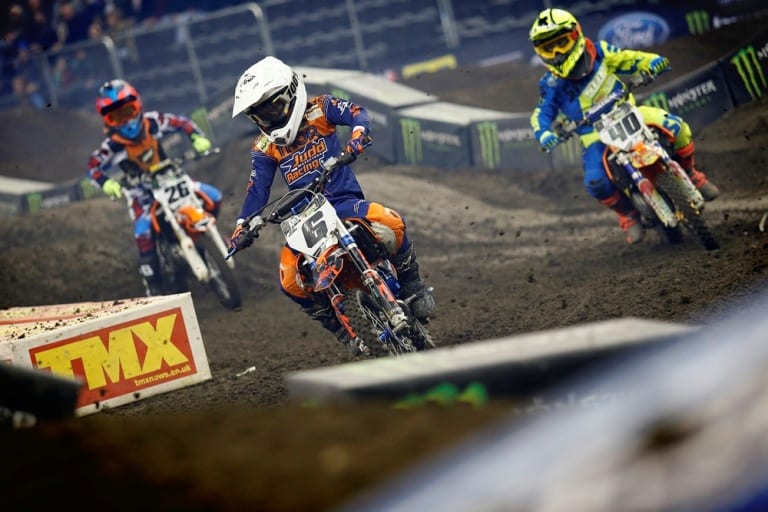 The 2016 Monster Energy Arenacross Tour, powered by Ford Ranger, has delivered on all points so far this year with stacks of action, on and off-track drama, mind-blowing Freestyle antics, amazing pit parties and, with the exception of the ProLites, changes in the leaderboard.

For those who haven’t yet had the pleasure of catching an Arenacross show, simply think of combining fast-paced, short-bursts of Motocross racing with high-octane Freestyle motocross. Mix in pulsating music, atmospheric lighting, lasers, pyrotechnics and fireworks, then wave goodbye to gloomy January for a full-on three and a half hours of non-stop family entertainment and you’ll soon be an AX convert.

The Metro Radio Arena in Newcastle will host rounds eight and nine of the indoor spectacular on Saturday the 30th and Sunday the 31st of January and there’ll be plenty of lively crowd participation as the action gets underway at 7pm on Saturday and 3pm on Sunday.

SJR Kawasaki’s Jack Brunell showed his mettle at the last round at Birmingham last Sunday, finishing third behind reigning AX champ Thomas Ramette (SR75 Molson Racing Suzuki) and LPE Kawasaki’s Florent Richier. Together with the other top Brits of Adam Chatfield, Buildbase Honda and Matt Bayliss, Wooldridge Demolition Honda, he’ll be all out to be the Pride of Britain and lay claim to some Pro class podiums.

Meanwhile, on the home-grown talent front, nine-year old Ollie Colmer from Hexham has been something of a leading star in the highly-competitive 65cc category. Here, youngsters from the age of seven to ten ride the same circuit as the professionals and never fail to impress the Arenacross audience.

This is young Ollie’s first series competing in Arenacross and he has only been off the podium twice so far this year. Prior to the Birmingham round of the championship last weekend, Ollie was leading the championship ahead of racing-rivals Kiean Boughen and Jak Taylor but a crash on the challenging whoops in the final race of round seven, in which he was winded and eventually finished eleventh, saw a slight easing of the throttle on his championship charge. However, anything could happen as he heads to his local round this Saturday and Sunday. He’ll have a battalion of school friends and club riding pals in the audience and they are all getting ready to raise the roof as they cheer on, and get behind their mini racing warrior.

The Year five schoolboy, whose favourite subject is PE, said that his school, Allendale Primary, has been very supportive of his racing efforts and helped with allowing him to take time off to travel to the Arenacross rounds. “My headmistress Mrs Hawkins, all my school friends and also loads of riders from the North East MX Club will be watching this weekend, and I want to bring the trophy home for them. I think I will feel the pressure, but I’m proud to represent my home town.”

TICKETS
For anyone wanting to cheer on this talented racing star, tickets are available directly from the venue by calling 0844 493 6666.