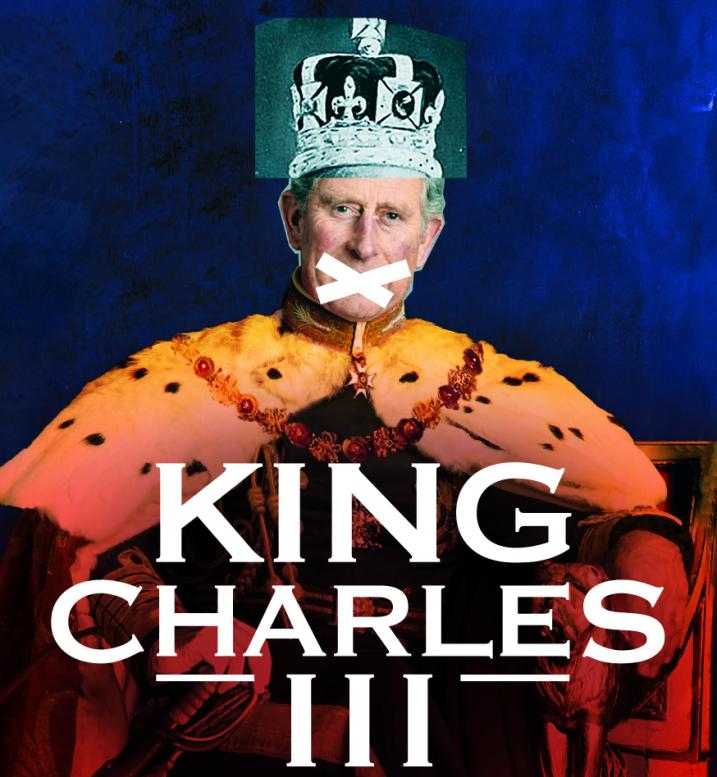 King Charles III takes us to a time in the future when the Queen is dead and after a lifetime of waiting, Prince Charles ascends the throne. A future of power. But how to rule? Mike Bartlett’s play explores the people underneath the crowns, the unwritten rules of our democracy, and the conscience of Britain’s most famous family. The show has this year been awarded the Olivier Award, Critics Choice and South Bank Sky Arts Award for Best New Play.

Taking the lead role of King Charles is Robert Powell, perhaps best known for his portrayal of Jesus in Jesus of Nazareth (which won him a BAFTA nomination for Best Actor) and as series regular Mark Williams in Holby City. Powell’s theatre credits include Singin’ in the Rain (Palace Theatre), Ubu Roi and Pirates (both Royal Court), Travesties (RSC), Tovarich (Chichester Festival Theatre), and more recently a touring production of Jeffrey Bernard Is Unwell.

Written by Mike Bartlett, who previously collaborated with Rupert Goold on Earthquakes in London and Decade. His other plays include An Intervention, Artefacts (for which he won the Old Vic New Voices Award), Cock (which was awarded an Olivier Award in 2010 for Outstanding Achievement in an Affiliate Theatre at the Royal Court), Love, Love, Love (which won Best New Play at the 2011 Theatre Awards UK) and most recently Game.

King Charles III is directed by the Almeida Theatre’s artistic director Rupert Goold with Whitney Mosery and designed by Tom Scutt, with music composed by Jocelyn Pook, lighting by Jon Clark and sound by Paul Arditti.

Almeida Artistic Director Rupert Goold has most recently directed The Merchant of Venice (originally produced for the Royal Shakespeare Company), American Psycho: A new musical thriller and King Charles III for the Almeida Theatre, and will direct Medea this Autumn. King Charles III transferred to the West End at the Wyndham’s Theatre and won an Olivier Award for Best New Play, and will this year transfer to Broadway and embark on a UK tour.

Elsewhere Goold’s work includes Made in Dagenham in the West End. He was Artistic Director of Headlong from 2005 until 2013 where his work included The Effect, ENRON, Earthquakes in London and Decade.

Other theatre credits include The Last Days of Judas Iscariot at the Almeida, Macbeth at Chichester Festival Theatre, in the West End and on Broadway and No Man’s Land at The Gate and in the West End. He was Associate Director at the Royal Shakespeare Company from 2009 to 2012 and was Artistic Director of Northampton Theatres from 2002 to 2005.

He has twice been the recipient of the Laurence Olivier, Critics’ Circle and Evening Standard Awards for Best Director. For television he has directed Macbeth and Richard II for the BBC and Neal Street Productions, the latter of which was nominated for a BAFTA. His first feature film, True Story, which stars James Franco and Jonah Hill for Plan B and Fox Searchlight has just been released in the UK.

WHERE & WHEN
King Charles III appears at Newcastle Theatre Royal from Mon 28 Sept – Sat 3 Oct 2015.
TICKETS
Tickets from £14.50 (pay 50p less per ticket when you book online). Tickets can be purchased from the Theatre Royal Box Office on 08448 11 21 21, (calls cost 7p per minute plus your phone company’s access charge) or select your own seat and book online at www.theatreroyal.co.uk