Big Country in the Big City 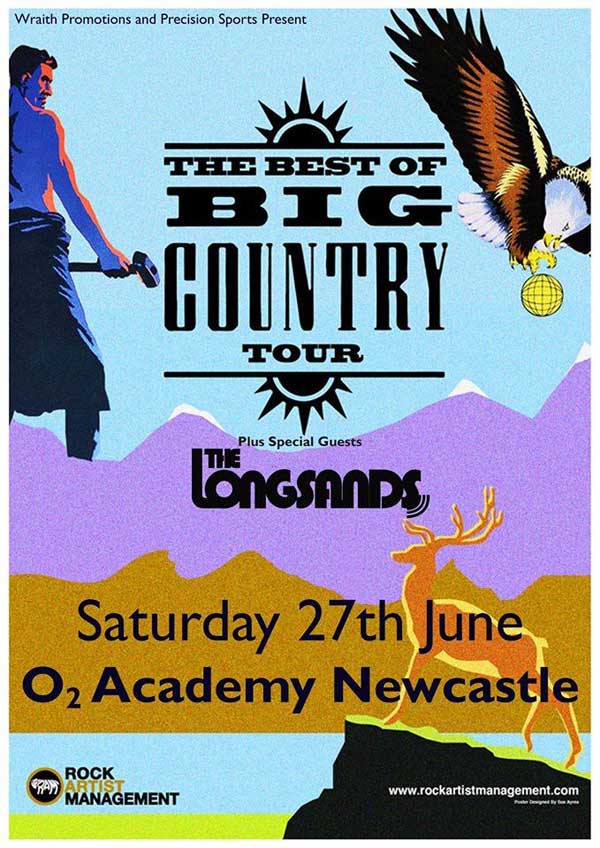 They are one of those bands that time never forgets and, on the night of June 27, they’ll be appearing at the O2 Academy in Newcastle on the Relentless Promotions offering ‘The Best of Big Country Tour,’ writes Peter Mann.

As the cult alternative rock group embarks on another nationwide tour drummer Mark Brzezicki said: “We’re always celebrating different aspects of the band and our music around the country week in, week out.

“We do it to keep flowing, keep those creative juices going and continue to be a part of the bigger picture but, for me, if it’s not being with Big Country then there’s other projects on the go as I’m a full-time drummer and this is a full-time job for me.”

Keeping themselves busy, either as a collective or individually, has allowed Brzezicki and the band to progress and, since they arrived on the scene back in 1982 they have had to adapt to the changing times within the industry.

It’ll be one of the reasons why the drummer has found himself collaborating with the likes of Susie Quatro and Tears for Fears, Pete Townshend and Roger Daltrey on their respective solo albums, or bands as a member of such as Ultravox, From the Jam and The Cult.

“When we launched the band back in ’82 we sounded very different musically,” Brzezicki continued.
“We had to think of ways in which to make things less Punk, or Celtic, so the styles have been constantly changing and, although I still found myself with that of Pete and Simon Townshend, it was felt that Big Country were in need of a rhythmic section to complete it. “This gave me the chance to create my own style, one which is akin to a rousing U2 or Simple Minds type of music.”

As with other musicians they have their individual influences, the same of which can be said of Big Country’s support acts when they come to Newcastle at the end of the month. UK indie-rock band, The Longsands, have found influence across a range which includes Oasis and The Stone Roses, The Beatles, The Doors and The Jam.

It is because of these influences which set standards with which individuals, or groups, strive to reach, however, there is always something that occurs meaning rethinks, a general change of direction. For Mark and his Big Country bandmates theirs occurred when Stuart Adamson passed away in Hawaii in December 2001.

“We ground to a halt when Stuart committed suicide which was a great tragedy for the band,” Mark continued. “He had that signature twin guitar that made Big Country, which we needed when came back onto the scene. Luckily we found something in another, separate frontman, Mike Peters who came in for a couple of years (Mike joined the band between 2011 and 2013 being there for their UK tour, the single Another Country and the 2013 album The Journey)

“Unfortunately he couldn’t commit long-term due to being elsewhere as well. That’s when Simon Hough arrived on the scene who made us feel like we were back home – he’s not only a professional but very humble in making Big Country what they are now.”

Having, on the main, kept band membership ‘within the family’ a trip to Tyneside is always a welcome addition to any musical calendar let alone Big Country’s. Being supported by The Longsands and X Factor contestant, Geoff Mull just adds that little extra spice to the occasion.

A combination of these three will certainly make for an electrical night of musical prowess at the O2 Academy in Newcastle and is certainly a one in which Brzezicki and Big Country are much looking forward to performing.

He added: “People do still want to hear our songs and playing in Newcastle is always a very, very vibrant showing and get a great reception on what are always exuberant evenings.
“We always enjoy coming to Newcastle and it’s something we’re really excited about doing for what will be a special audience in a special city.”

Of their nine albums to date, from The Crossing in 1983 through to The Journey in 2013, a good three decade stretch, in it is their second studio album, their only UK number one, Steeltown, which is afforded the majority of airings.

As Mark explained though, they’ll mix the evening up according to fan requests on the night itself.
“The shows are usually composed of our Greatest Hits and you may just get some from Steeltown but we’ll alter the set as we go for we take good notice of what the crowd wants and calls for as each set progresses.”

WHERE & WHEN
‘The Best of Big Country Tour plus special guest The Longsands’ on Saturday June 27 is presented by Relentless Promotions in association with Rock Artist Management at the O2 Academy, Newcastle.
TICKETS
Tickets priced at £20 are available from http://www.ticketweb.co.uk/event/big-country-tickets/149639