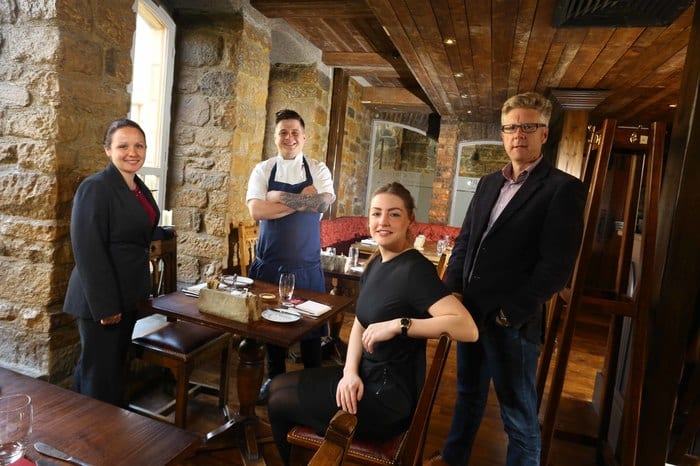 An exciting new phase in Blackfriars’ history is being unveiled this week as a local restaurateur brings back to life disused buildings within a 13th century medieval friary in Newcastle.

Restaurateur Andy Hook, who has been at the helm of Blackfriars Restaurant, Banquet Hall and Workshop for 16 years, has dedicated the past few years to an ambitious scheme to renovate several empty areas of the historic venue – including the friary’s Parlour and library rooms. He has also commissioned local craftsmen to painstakingly refurbish the dining room, which served as the friary’s refectory, recreating additional seating and an open kitchen.

The Parlour, which is next to the restaurant, was originally the heated waiting room for visitors to the friary. For many years it was a gift shop, but it has been refurbished by traditional craftsmen and has now been re-instated to its former glory, to create a unique setting where guests can enjoy a drink before or after their meal.  Bar drinks and snacks will also be served throughout the day.

The rooms above the restaurant, formerly the libraries for the Dominican Friars and meeting rooms for the city’s Crafts Guilds, now house a larger 14-seat Cookery Workshop to enable the Blackfriars team to expand the number of workshops, which now average around 250 per year and include Bread Making, Dinner Party cooking, kids’ cookery classes and corporate events, one of the few dedicated cookery schools in the region. Customers can now dine in the Workshop to sample the food they have been cooking, with an additional dining table.

Above the restaurant’s dining room, the team has also opened the former Tanners’ Meeting House as a Tasting Room, featuring antique 19th century seating, which will now cater for a range of corporate and private events including wine, beer and whisky tasting for up to 40 people. The restaurant’s toilets have also been relocated to the first floor to make way for more seats and greater comfort.

Blackfriars’ Banquet Hall, which hosts more than 300 events per year including weddings, themed events, medieval banquets, corporate events and private parties, now features a brand new toilet block in the former Prior’s Quarter, including disabled facilities, as a very modern addition to the authentic medieval dining space. This area of the building has seen its fair share of royalty, including King Edward III who met Edward Balliol, the claimant to the Scottish throne, inside the hall in 1334. 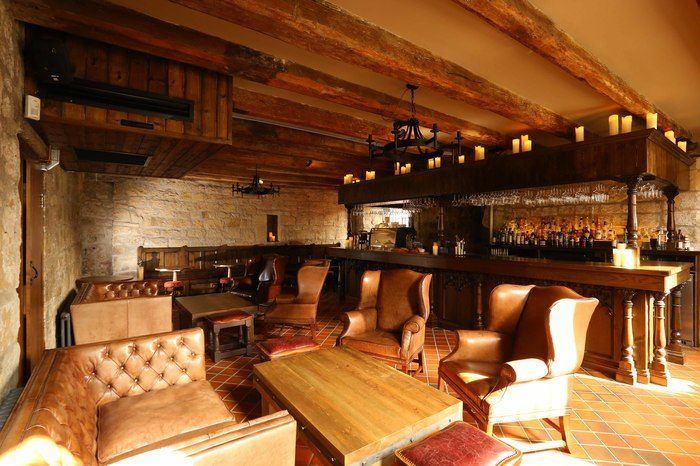 The main restaurant has also undergone extensive refurbishment, increasing seating capacity to 90 people with additional booth seating. This historic dining space has become one of the leading restaurants in the region under Andy Hook’s leadership, winning the title of ‘Taste of England’ in the North East England Tourism Awards.

On the menu at Blackfriars you’ll find dishes such as Barbary duck breast & leg, orange purée, charred Jerusalem artichoke and wild garlic, or Pan-fried black cod, spring onion gnocchi, crispy batter & sea vegetables, and Passionfruit cheesecake, pavlova and passionfruit sorbet for dessert.   The restaurant is open Monday-Saturday for lunch and dinner, plus Sunday lunch, for which it was voted Best Sunday Lunch in the North East by readers of the Independent.

Andy Hook, manging director of Blackfriars said: “We’ve been planning to expand Blackfriars for many years now, so it’s very exciting to see our vision for these wonderful buildings come to fruition.

“It’s been a very rewarding process to give the lesser-known parts of this historic site a new lease of life, and open up these new areas to the public. The rooms are hidden gems, several of which have been out of view from the public eye, and we’re delighted to be the ones to reunite them with locals and visitors to the city alike.  We also have a fantastic and flexible space for private and corporate customers to enjoy.

“We’re very privileged to be the current custodians of Blackfriars and its unique heritage which the city should be proud of. Long may it continue.”

The refurbishment has been overseen by Newcastle interior designers, Design Collective.

“It’s always an honour to be trusted to design listed buildings, especially when they are of ecclesiastical importance such as Blackfriars. It makes our job easier when the backdrop of a building is so beautiful to begin with but the brief was to make the space more functional. The addition of the parlour we hope will create more of an experience for diners being able to take after dinner coffee in the leather arm chairs by candle light. By moving the Cookery School, toilet facilities and wine and whiskey tasting events to the first floor, the public may now appreciate a part of Newcastle’s history which many will have never seen before.

We worked closely with the planners and English Heritage to not only preserve these special areas but ensure they are being used and thoroughly appreciated instead of being hidden away. Everything from the types of timber, the furniture, lighting and fabrics have been carefully considered to reflect the rich history and heritage of the Friary including bespoke stained glass windows depicting the ‘Black Friars’ themselves.”

The Blackfriars team is also keen to develop its education programme with schools and already hosts a number of Educational Realms days where school children learn about medieval life and how the friars lived day to day.

It’s been a busy time for Andy and his team, as last year they opened Blackfriars’ sister restaurants – Hinnies Restaurant in Whitley Bay, and Dobson & Parnell on Newcastle’s Quayside, all of which form the Hooked-on Group.

Read More »
December 15, 2021
PrevHave you read?Bridging Health And Social Care Issues On Both Sides Of The Tyne
Next read...New Take That Musical ‘The Band’ To Visit Newcastle Theatre RoyalNext