British Legends Return To Tread The Boards in Newcastle 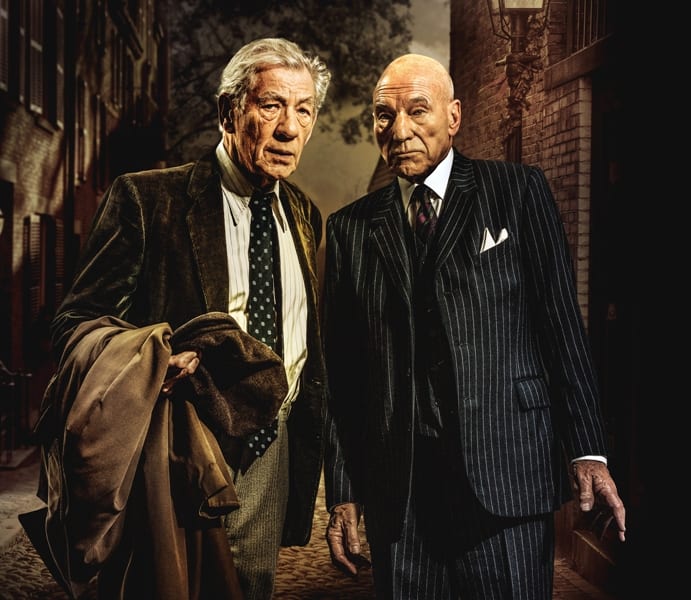 Following their sell-out appearances in Waiting for Godot in 2009, Ian McKellen and Patrick Stewart are set to return to the North East’s leading theatre to star in Sean Mathias’ acclaimed production of No Man’s Land, which comes to Newcastle Theatre Royal from Mon 15 – Sat 20 Aug.

The Harold Pinter masterpiece will embark on a UK tour in August before heading into London’s West End, where it will play a limited 14 week engagement at the Wyndham’s Theatre.

Directed by Sean Mathias, this production of No Man’s Land received highly acclaimed reviews at the Cort Theatre in New York whilst in repertory alongside Waiting for Godot, also starring stage and screen friends, McKellen and Stewart and directed by Mathias. The production of Waiting for Godot had transferred from London where it celebrated a sell-out run at the Theatre Royal Haymarket, the last time these masters of British theatre shared a West End stage.

One summer’s evening, two ageing writers, Hirst and Spooner, meet in a Hampstead pub and continue their drinking into the night at Hirst’s stately house nearby. As the pair become increasingly inebriated, and their stories increasingly unbelievable, the lively conversation soon turns into a revealing power game, further complicated by the return home of two sinister younger men.

Patrick Stewart (Hirst) said: “I saw the original production of No Man’s Land three times in one week at Wyndham’s Theatre and would have seen it more if I could have afforded the tickets. I made a promise to myself that one day I would play Spooner or Hirst but to be doing it back at Wyndham’s with Ian McKellen was a fantasy I never entertained.”

Ian McKellen (Spooner) says: “Playing Spooner to Patrick’s Hirst on Broadway was a constant joy, which is why I am delighted to be back with him in the UK.”

The pair starred together to critical acclaim at Newcastle Theatre Royal in Waiting for Godot in 2009 and McKellen said: “It’s a wonderful city with wonderful audiences. When the RSC in the 1970s were looking for a third home beyond Stratford and London, I said to Trevor Nunn “have you considered Newcastle?” And partly as a result of that conversation the RSC did go to Newcastle and I went with them. So I feel like it’s going home to go to Newcastle.”

Further casting has yet to be announced for No Man’s Land which will have set and costume design by Stephen Brimson Lewis and lighting design by Peter Kaczorowski.

Multi award-winning Ian McKellen has had a 55 year long career on stage and on screen. For the Royal Shakespeare Company he has played Romeo, Macbeth, Iago and King Lear and at the National Theatre, in productions of Coriolanus, Richard III, Uncle Vanya and The Seagull. He gained his first Oscar nomination for Gods and Monsters and his second for Gandalf in the Lord of the Rings trilogy. He is Magneto to Patrick Stewart’s Xavier in the X-Men movies, Richard III and most recently Mr Holmes.

Multi award-winning Patrick Stewart has numerous notable stage credits to his name including Anthony and Cleopatra, The Tempest, Macbeth, The Merchant of Venice, The Master Builder and his acclaimed solo adaptation of A Christmas Carol. Known world-wide as Captain Jean Luc Picard in Star Trek: The Next Generation and Professor X in the X-Men franchise, his additional film and TV credits include the 2009 TV movie adaptation of Hamlet alongside David Tennant and Ahab in Moby Dick.

British film and theatre director, writer and actor, Sean Mathias has been a long-time collaborator with McKellen having directed him in numerous theatre roles including Uncle Vanya, Alan Bennett’s Talking Heads, August Strindberg’s The Dance of Death, Waiting for Godot (alongside Stewart) and Bent which he later directed on film, winning the ‘Prix de la Jeunesse’ award at the Cannes Film Festival.

This production of No Man’s Land is produced by Stuart Thompson, Flying Freehold Productions and Playful Productions.