I Love Newcastle was given a sneak peek into the fantasmagorical stage show of Chitty Chitty Bang Bang, and spoke to West End star Carrie Hope Fletcher. 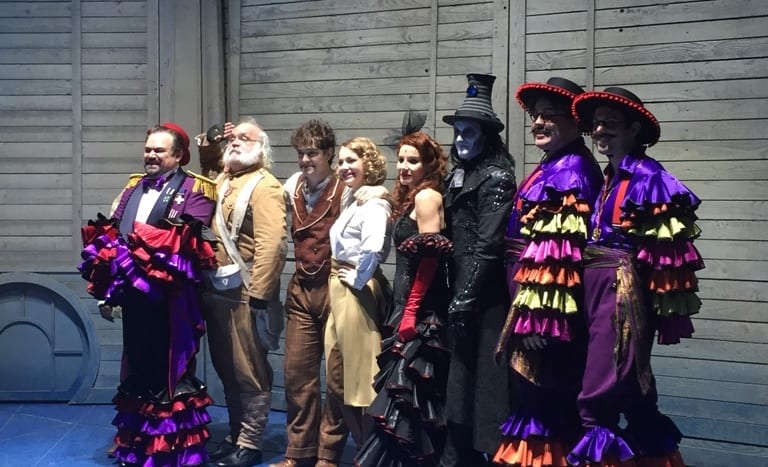 Chitty Chitty Bang Bang’s national tour arrived in Newcastle on June 1st, and on its second day of shows, we were given a backstage pass for the production receiving rave reviews across the UK.

Walking into the Theatre Royal’s stage door, the opening notes of ‘Doll on a Music Box’ played over the stage tannoy. In just ten minutes, the 2pm matinee performance would be over, and we would venture backstage to meet the cast.

After a short wait, we were called backstage and walked into another world. Without revealing too much, I caught a glance of some incredible looking contraptions, boxes filled with multicoloured balls, and a menacing looking wagon.

We had the opportunity to see the main cast members decked out in vibrant costumes during the photo shoot. From the humble garments of Caractacus Potts and Truly Scrumptious to the quirky samba outfits of Baron and Baroness Bomburst, the lineup was a taste of the eccentric nature ofthe play.

Chitty herself was tucked out of sight, seemingly too shy for all the attention. To catch a glimpse of the legendary automobile, seeing the show for yourself will be the best and most thrilling option. But be quick, as the show will only be at the Theatre Royal until Sunday!

After the photo shoot, myself and Ben Nicholson had the chance to speak with one of Chitty Chitty Bang Bang’s lead actors Carrie Hope Fletcher, playing Truly Scrumptious in the production:

You were part of the original Chitty cast as Jemima Potts and returned to play Truly Scrumptious – what inspired you to return to Chitty Chitty Bang Bang?

It’s a show that’s always been really sentimental to me because I grew up with the movie. My parents showed it to me when I was a kid, and it’s just that film that everyone remembers and everyone loves. It’s always on at Christmas, so you can always relive that childhood fondness. And then of course being in it when I was a kid, it was such a magical show. When people ask me “What was your childhood like?”, I’m like “Well, I flew in a car”, you know? I was in Mary Poppins as well, so I had a nanny who did magic tricks, you know, ‘casual’.

So yeah, as soon as the audition came up for Truly Scrumptious I was like “I have to go for it”, and thankfully they cast me! It’s really strange, because they sell the original soundtrack at front of house and they play it. So it’s me as Jemima singing front of house, which is really a bit bizarre.

Are there any big differences between the roles of Jemima Potts and Truly Scrumptious?

Yeah, because you know, they’re vastly different characters because they come from such different backgrounds. Caractacus Potts is Jemima’s father, and he doesn’t come from a wealthy background at all. He barely scrapes together a living to look after his kids, and that’s where he comes up with all these weird and wacky inventions to try and make some money to put food on
the table.

Truly has not known anything but wealth and elegance and money, but even so she fights for the people who don’t have that, which is kind of what connects them I guess. She’s never known sort of, fun, and she’s constantly been trying to prove herself as a woman. You know, she rides this motorbike, she’s constantly trying to be independent and prove that she’s not just a woman. Because this is set in 1919, so back when women had only just gotten the vote.

She’s constantly trying to prove herself, and with Mr Potts she doesn’t really have to do that. She can chill out, chillax, and have a bit of fun, which she’s never really known. He’s (Caractacus) very whimsical and he makes up games for the kids, and most of this show is sort of in his own fantasy, it’s stories that he’s told his children. She kind of realises that’s what she’s been missing in her life.

Speaking of fun, what part of the show is your favourite to perform?

I love ‘Doll on a Music Box’, it is my favourite bit because it’s the epitome of Truly Scrumptious. It’s the part of the movie first of all that everyone remembers, it’s like the iconic bit. But also we kind of we talked about Truly and (Caractacus) Potts in that, because he plays a raggedy clown and it’s very much who they are as people completely exaggerated. You know, like she’s mechanical and rigid and is always kept within these guidelines.

The lyrics are “You cannot see how much I long to be free”, it’s really deep when you think about it. So she is constantly trying to break out of this rigid guideline that people keep trying to put her into because she’s a woman. And Mr Potts is you know, all over the place, so it’s kind of those two characters summed up in that scene. It’s just my favourite, I absolutely love it. Plus there’s really cool choreography, and I get to wear a cute dress, you know, there’s always that side of it.

How have you found the audiences, and moreover the fans, in Newcastle so far?

Newcastle have been amazing – everyone at stage door yesterday was so friendly, and just up for a chat and a laugh, and the audience have seemed that way as well. They’re roaring at all of the jokes and really happy to cheer at the end, it’s really lovely and it makes all the difference to us when you know that the audience is with you. Because Chitty is such an extraordinary story, it’s really difficult when you feel like the audience are disengaged, or they just haven’t opened their minds up to what a crazy, fun story that this is.

So when you hear them sort of gasp or cheer or just make some kind of reaction, it just makes you go “Ah yeah, they’re loving it”, so you just go for it more, it’s great. You seem to have a very strong following no matter where you go in the country

It’s crazy, isn’t it? I try not to think about it too much, because then I start to overanalyse everything that I do and start to freak myself out. But yeah, it’s been overwhelming because online it’s just numbers, and even though they’re big numbers, it’s easy just to disassociate yourself and disengage from that number on a screen.

Then all of a sudden, when you’re travelling around the country and there’s lots of people wherever you go, you’re like “Oh my god”. You know that they’re not just numbers, but it’s easy to forget so suddenly when you’re reminded when you know, you’re stood at stage door and there’s like fifty people around you, you’re like “Ooh OK”.

In the YouTube video you posted before leaving for Newcastle, you described yourself as a ‘house cat’: are there any big challenges that come with having to constantly move around to different places?

Fitting everything in my case has been a difficult one. I thought people only sat on their suitcases to close them in movies; I had to do that last week because I literally couldn’t fit everything in. We have these clear boxes that they give us for all of our dressing room stuff, and they put them on a truck which is quite nice, so it’s quite handy.

But yeah, I am a house cat. I miss my creature comforts and there’s only so much that I can bring on tour. I miss my books especially, I’m a bit of a book hoarder. There’s more that I haven’t read than I have in the house. But I just like being surrounded by them, so it’s the only thing that I kind of miss the most.

I’m probably more scared of him now than I was when I was a kid. When I was a kid, the Child Catcher used to play with us backstage in costume. It was Richard O’Brien and he’s absolutely mad, but he’s so much fun. To us, it was like “Woo, you’re really cool”, it was a lot of fun. But yeah, Matt is incredible, Matt Gillett. He’s absolutely terrifying, we had a little Twitter jaunt yesterday. In the makeup and everything as well, he’s just so incredible, so intense.

I think when I was a kid, I didn’t quite understand the severity of what the Child Catcher was. He takes children and kills them, and he can smell their blood. As a kid, I never really thought about that, but as an adult I understand it far more than I want to. He smells children’s blood, finds them, and kills them – it’s terrifying.

We then heard the dressing room door open, at which point the Child Catcher (Matt Gillett) entered the room:

After a brief moment of panic, we continued the interview:

A big part of the Chitty Chitty Bang Bang story is imagination and invention: if you could invent one thing to make your life easier, what would it be?

Ah, a teleporter, absolutely a teleporter yes. And I’m a big fan of Disney, so to be able to go to Disneyland just for like the hour between shows? Perfect! I would love a teleporter and when you’re travelling so much on tour, it’d be lovely just to be able to click your fingers and be there.

And lastly, do you have any plans to explore Newcastle while you’re here?

Definitely yeah, I’ve been told about Quilliam’s Tea Shop. I definitely have to go, because I love tea. This travels on tour with me, it’s just my little tin bursting with teabags. I absolutely love tea, so yeah, Quilliam’s Tea Shop it is, I’m gonna have to go there. And just the architecture around everywhere. Like down the road, I think it’s just above Waterstones, it looks like Gringotts from Harry Potter. And it’s above a bookshop, what more could you want? I definitely just need to have a wander.

Chitty Chitty Bang Bang plays at Newcastle Theatre Royal from Wednesday 1 June – Sunday 12 June. Tickets are from £23.00 and can be purchased at www.theatreroyal.co.uk or from the Theatre Royal Box Office on 08448 11 21 21 (calls cost 7ppm plus your phone company’s access charge).