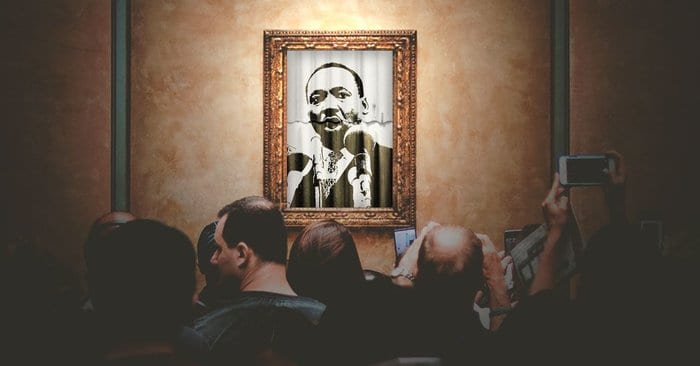 Inspirational civil rights campaigner and political icon Martin Luther King Jr, who received an honorary doctorate from Newcastle University in 1967, has topped a public vote by Vita Student, the UK’s only experience-led accommodation provider, to be named the city’s favourite alumni.

The American Baptist minister, activist and leader in the African-American civil rights movement was voted top of the #InTheFrame poll to find the famous face the people of Newcastle are most proud of, and who will be incorporated into the wall art of Vita Students’ new Westgate residence which opens in September.

While his ‘I Have a Dream’ speech is known around the world, few people are aware of another powerful speech he gave during a whistle-stop tour of North East England where he accepted an honorary doctorate in civil law.

In the speech, he warned of the dangers of everyday racism and plucked phrases from a repertoire used in his previous speeches.

He ended by saying: “With this faith we will be able to transform the jangling discords of our nation, and of all the nations in the world, into a beautiful symphony of brotherhood and speed up the day when all over the world justice will roll down like waters, and righteousness like a mighty stream.”

Set to open its new Westgate development on the site of the former Norwich Union House this September, Vita Student wins awards for its commitment to customer service and strives to help students feel at home in their new city from day one.

Vita Student is revolutionary in the market and continually recognised and awarded for placing as much emphasis on customer service as it does its facilities and wins awards for its ongoing commitment to student customers.

“What a fantastic choice to welcome our residents to this proud city and help them to feel a connection with their new home.”

“We asked the people of Newcastle to choose a name that would immediately evoke a sense of pride and belonging, so we’re hugely excited the iconic campaigner and one of the world’s greatest ever public speakers will take centre-stage at Vita Student.”

The seven storey Vita Student development – on the site of the former Norwich Union House – is the epitome of what students in 2016 are looking for, complete with stylish social spaces which will include private study rooms, expansive lounge areas, private dining rooms, a movie room, games area and state-of-the-art gym. The front of the building also has space for a restaurant or a bar.

Vita Student Newcastle is the ninth development in the UK from global developer and operator Select Property Group. Five more are in progress across University cities in the UK, including a further property in Newcastle, at Strawberry Place. The leading student accommodation provider that creates striking residences, featuring state-of-the-art facilities such as gyms, movie rooms, communal areas and study rooms.

Read More »
December 15, 2021
PrevHave you read?A Taste Of Thailand Arrives On The Tyne
Next read...Ultimate 80’s Party To Go ‘All Night Long’ At O2 Academy NewcastleNext