Newcastle College Students surprise the public with a flash mob 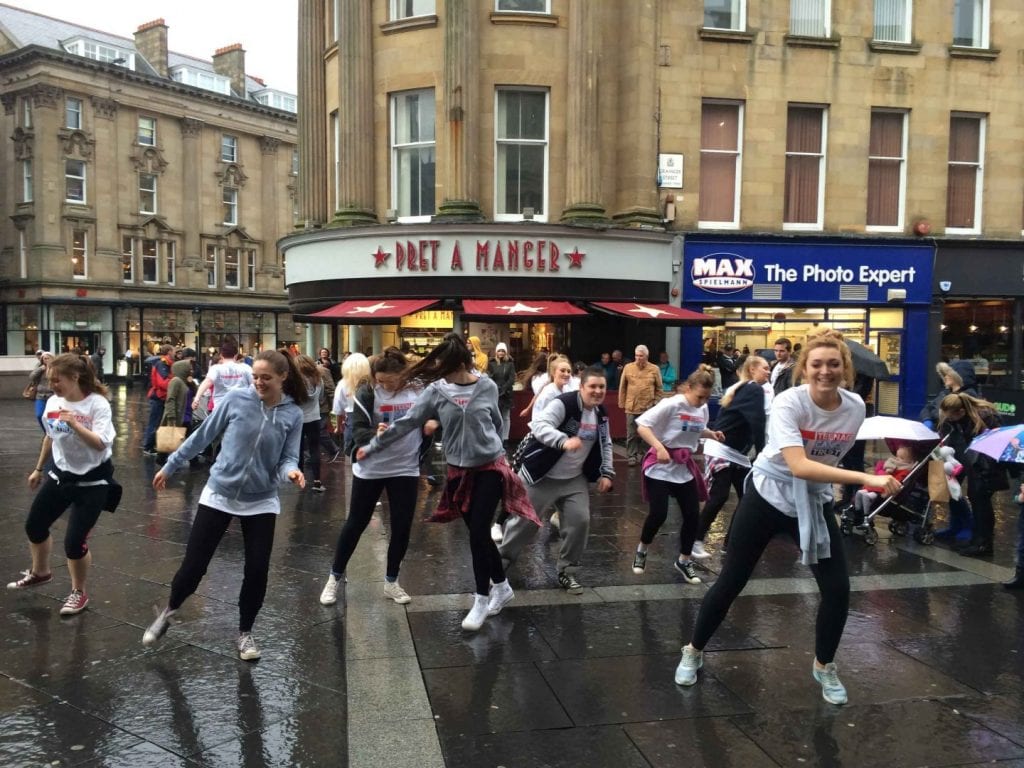 Students from Newcastle College raised some eyes to help support a cancer charity, when they surprised the public around Grey’s Monument with a flash mob. More than 30 Performing Arts students from the college worked on designing and performing a flash mob to help support their pledge over the next year to Teenage Cancer Trust. Flash mobs have recently gained popularity and involve a group of people suddenly performing a surprise act in a public place and then dispersing.

The group of students quietly assembled at Grey’s Monument at 2pm on Thursday, November 6 and then launched into their entertaining dance to the surprise of the public who were completely unaware that anything would be happening that day. The idea of the flash mob came from the students who wanted to raise some awareness of the forthcoming Teenage Cancer Trust Christmas Concert at St Nicholas Cathedral in December, which the students are also helping to organise.

The Christmas at the Cathedral concert, which is now in its third year, will take place on Wednesday, December 17. The popular concert features a range of celebrity performances alongside carols and readings to celebrate Christmas. The concert is being principally sponsored for the third year by Clarke Mairs Solicitors of Newcastle and is organised by Jonathan Wallis of the Teenage Cancer Trust North East Fundraising Board, and produced by Ray Laidlaw who was one of the founding members of the band Lindisfarne.

Newcastle College students joined a committee with Jonathan and Ray to help organise this year’s concert and some of the students will also be joining the line-up of celebrities performing at the event.

An official announcement of the full line up of performers will be made later this month and the organisers have promised a brilliant show of music and comedy mixed in with carols and readings. Previous performers have included Auf Wiedersehen, Pet’s Tim Healy, Emmerdale’s Charlie Hardwick and Chelsea Halfpenny, Britain’s Got Talent winner Jai McDowall, ITV Vera’s David Leon, Blue Peter’s Helen Skelton and North East favourite Billy Mitchell.

Jonathan Wallis said: “We are delighted to have the support this year of Newcastle College. The flash mob was an excellent way of raising the profile of Teenage Cancer Trust and helping to promote our forthcoming Christmas Concert. The public at Grey’s Monument on November 6 had a big surprise!”

Teenage Cancer Trust is the only UK charity dedicated to improving the quality of life and chances of survival for young cancer patients. The charity asked supporters to use their imagination and organise a fundraising event to raise funds for the seven young people aged between 13 and 24 diagnosed with cancer every day.

Other companies wishing to get involved by way of sponsorship or buying VIP tickets can email jonathanwallis@georgefwhite.co.uk

TICKETS
tickets cost £13 and are available through Newcastle City Hall and can be purchased via www.newcastlecityhall.org or by calling 0191 2778030.

WHERE & WHEN
St Nicholas Cathedral, Newcastle
The event starts at 7pm, 17th December 2014

Read More »
December 15, 2021
PrevHave you read?Top Tune at Newcastle’s Quayside
Next read...The ‘Quayside Cabaret Club’ to have its grand launchNext