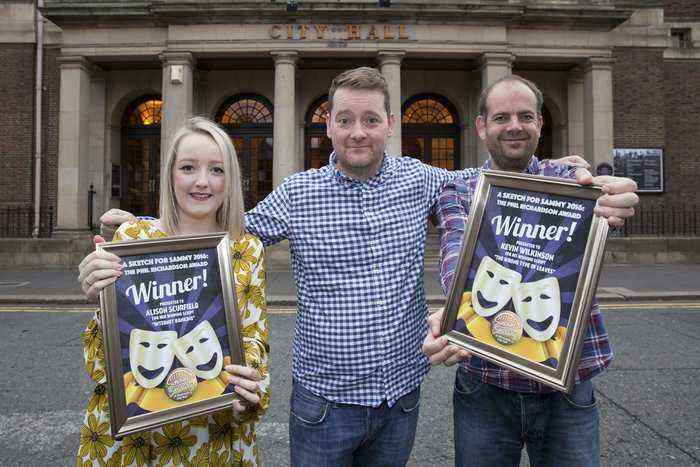 The Sunday for Sammy Trust has found two new comedy scriptwriters after a hard fought competition to have their sketches performed in front of a packed audience at Newcastle City Hall.

As well as having their sketch performed at the next Sunday for Sammy concert, the pair received the Sketch for Sammy 2016 Philip Richardson Comedy Award.

The award is in memory of a young musician who tragically drowned in Whitley Bay in 2013.

Philip Richardson was popular on the ‘open-mic’ comedy circuit in the region. His love of music and comedy was one of the reasons why his family and friends put on events and donated the proceeds to the Sunday For Sammy Trust following his death.

This year, the competition was so tight that two winners were announced. The winners are Alison Scurfield from Northallerton who is studying in Newcastle and last year’s winner, Kevin Wilkinson, from Morpeth.

Alison’s sketch featured an elderly, computer illiterate couple in “Internet Banking” while Kevin’s sketch, “The Wrong Type of Leaves” was a mime based on a railway carriage announcement.

Kevin, a business manager, said: “I’m delighted to have won this two years in a row, The whole experience was fantastic from the start, working on my idea and seeing it performed by the Laffalang Gang at the Stand. It was harder second time around to come up with a new idea but the effort was well worth it. I’m even more pleased as my original sketch is in the new Sunday for Sammy DVD too.”

Student Alison was delighted with her award too.

“I love comedy so much and it’s what I want to do. I had some great advice from my mentor Ed Waugh and to see my work performed in the Stand was great too.”

Well-known comedian Jason Cook who is a Trustee of The Sunday for Sammy Trust presented the pair with their certificates.

“ It’s great to see fresh, new comedy ideas coming through and I’m sure both sketches will go down well with the Sunday for Sammy audience at the next show in 2018.”

Stars from the show have been spotted in various parts of Newcastle filming adverts for the new DVD which is out now.