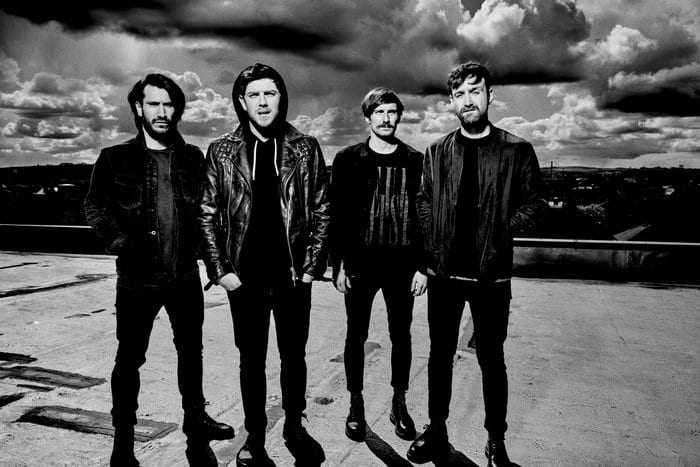 Twin Atlantic have become the alternative rock band of the moment with the release of new album ‘GLA’, out today. Critics hail it their best yet and new single ’The Chaser’ has gone straight on the Radio 1 playlist following a 6 week playlist for first single ‘No Sleep’.

“Turns out, when Twin Atlantic unleash untold savagery in the form of a pop song, they’re amazing.” **** NME

‘GLA’ from riff to lyric sees Sam McTrusty transform into rock star royalty, against the backdrop of guitarist Barry McKenna’s searing lead lines, which are possessed of powerful complexity and nuance. The perfect polished pop songs have been ditched, replaced by tracks that are just as compelling, but possessing new depth and sophistication, while never shedding that primal Twin Atlantic kick fuelled by bass player Ross McNae and drummer Craig Kneale. And they are personal and from-the-heart in a way the group have never before delivered.

“…they’ve upped their game beyond measure. GLA’s songs are snappy, its drums gigantic, its guitar riffs thrilling and McTrusty sings … with the conviction of a man reborn. Anthem piles upon anthem … and this is surely what Twin Atlantic were aspiring to all along.” **** Q

Tickets are available at: www.twinatlantic.com

‘GLA’ was written in Glasgow, and the band repaired to Topanga Canyon in Los Angeles to record the album, working with Jacknife Lee (U2, Snow Patrol, Two Door Cinema Club) who had previously produced some tracks for previous Top 10 album ‘Great Divide’ (2014). Under his direction, they eschewed old school recording techniques, taping their parts separately. This change in their recording process marked the grander ambitions of the new songs, while their dream mixer Alan Moulder (best known for his unforgettable work with Arctic Monkeys, Foals, Foo Fighters and My Bloody Valentine) came aboard to give the album the essential finishing touch.

Read More »
September 18, 2020
PrevHave you read?Geordiemojis Are Here!
Next read...Geordie Fundraiser To Take On Great North Run For Charity That Gives Disabled Nephews Days Of Their LivesNext