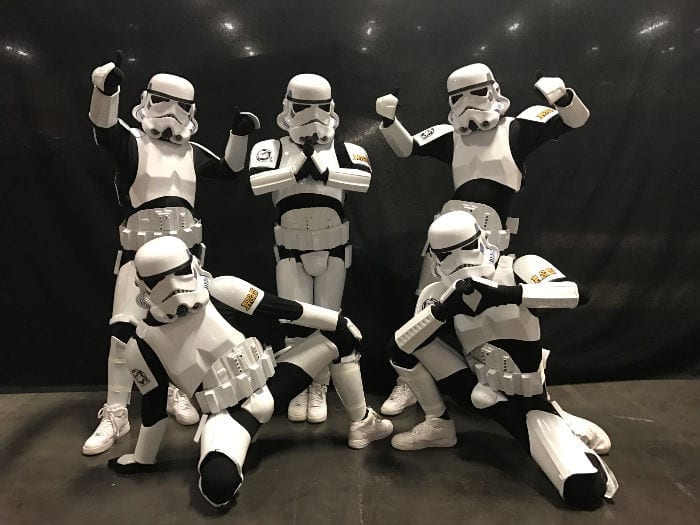 South Shields’ Summer Parade will welcome some special guests from a galaxy far, far away this summer.

Following a Space Fantasy theme, the popular Summer Parade will once again fill the streets with colourful floats and costumes on 6 July, as part of the South Tyneside Festival, organised by South Tyneside Council.

And dancing stormtroopers, Boogie Storm, will be entertaining festival-goers when the parade culminates at Bents Park for an afternoon of free entertainment.

Boogie Storm wowed audiences when they appeared on Britain’s Got Talent, with Simon Cowell securing the dancers’ place in the final by choosing them as his Golden Buzzer act.

The group finished third in the ITV competition and have gone on to perform at venues and events around the world.

And Boogie Storm are not the only dancers heading to the park after the parade, with dancing slinkies from Australian theatre group, Bedlam Oz, and Titan the Robot giving unique performances during the afternoon.

Councillor Ken Stephenson, Mayor of South Tyneside, is confident the performers will draw a big crowd.

“The Summer Parade is always a fantastic day out for all ages and this year is shaping up to be one of our most impressive yet,” said Councillor Stephenson.

“The Bents Park entertainment is a great way to finish the parade and we have some fantastic acts lined up.

“It is always amazing to see the streets of South Shields so full of colour and I can’t wait to welcome visitors from all over the region and beyond to make the most of it.”

One of the most popular elements of the South Tyneside Festival is the month of free Sunday concerts.

Marti Pellow, Gabrielle, Midge Are and the Lightning Seeds have all been announced as headliners.

The South Tyneside Festival is supported by BBC Newcastle 95.4FM and sponsored by Port of Tyne, Colmans Seafood Temple, South Tyneside College and The Sea Hotel.

The parade is also supported using public funding by the National Lottery through Arts Council England.

Read More »
December 15, 2021
PrevHave you read?Head to North Shields this bank holiday weekend for a proper food and drink festival
Next read...Five fantastic summertime walks within easy reach of NewcastleNext