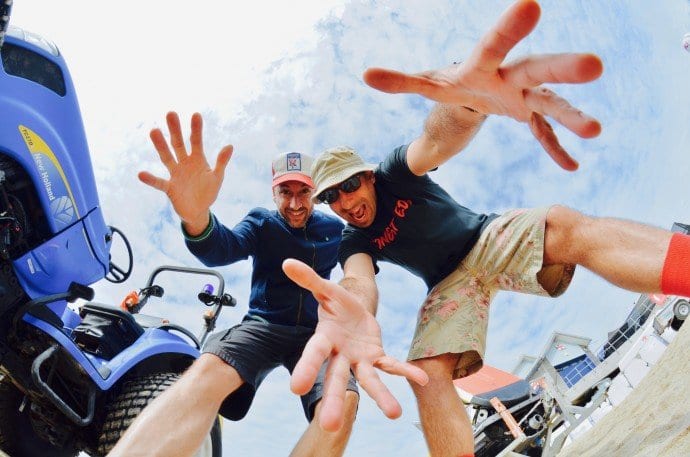 For fourteen years, DJ Format and rapper Abdominal have been entertaining crowds from Toronto to the UK. Now the hip-hop stars are back at it in 2017 with their new album Still Hungry. The new album comes off the heels of a wildly successful November 2015 UK tour that commemorated ten years since their last time performing together in the UK. The tour quickly sold out and the crowds loved every beat and bar the two artists dropped.

“I’m an old man in a young man’s game, where once my lungs spat flames, there remains but an ember thatsmoulders, but I fan that sh*t as I get older.” – DJ Format & Abdominal, “We Say” from Still Hungry

DJ Format & Abdominal wanted to ride this momentum to create their first full-length album together. While they both have collaborated on each other’s solo records, Still Hungry marks their first joint album. Still Hungry boasts the best of what Format and Abs bring to the hip-hop community: funky, up-tempo and slick beats, coupled with intelligent, savvy lyrics. The album also showcases a grittier, harder sound, reflecting the maturity of the two artists, giving their audience some head-bobbing bangers that could rock any concert hall.

Together, they have toured the UK more than twenty times to sold-out crowds. They have rocked stages such as Glastonbury Festival, Boomtown Festival and the iconic Jazz Café and Brixton Academy venues in London. They have also brought their high-energy shows to Australia and across Europe several times over the past fifteen years.

DJ Format, aka Matt Ford, won over hip-hop heads in 2003 with his slow-burning hit album Music for the Mature B-Boy, featuring the standout track We Know Something You Don’t Know starring the vocals of Chali 2na and Akil of Jurassic 5. Abdominal, aka Andy Bernstein, has been involved in Toronto’s music scene for nearly 25 years, performing at the Harbourfront Center for the Arts, Manifesto Festival, the SOCAN Awards, Pop Montreal Showcase, the Cavalcade of Lights and many other high profile events.

Like any memorable hip-hop team, DJ Format & Abdominal have found success by working off each other’s strengths and giving the global hip-hop community a unique and funky sound destined to be a fixture in every rap lover’s collection.

DJ FORMAT & ABDOMINAL UK LIVE DATES
May 3rd, Leeds / The Wardrobe
May 4th, Glasgow / Stereo
May 5th, Edinburgh / Voodoo Rooms
May 6th, Newcastle / Cluny
May 10th, Manchester / Gorilla
May 11th, Nottingham / Rescue Rooms
May 12th, Birmingham / Hare & Hounds
May 13th, Sheffield / O2 Academy
May 17th, Bristol / The Fleece
May 18th, Oxford / The Cellar
May 19th, Southampton / The Social Club
May 20th, Whitstable / Duke of Cumberland
May 23rd, Cambridge / J2 at The Junction
May 24th, London / Electric Ballroom
May 25th, Brighton / Patterns
May 26th, Norwich / The Arts Centre
“It’s amazing to be able to watch an artist grow into his own space and perfect his craft right before your eyes. I have been blessed to be able to see DJ Format & Abdominal grow from apprentices to masters, who cannot be contested in their respective fields.” – Chali 2na (Jurassic 5)