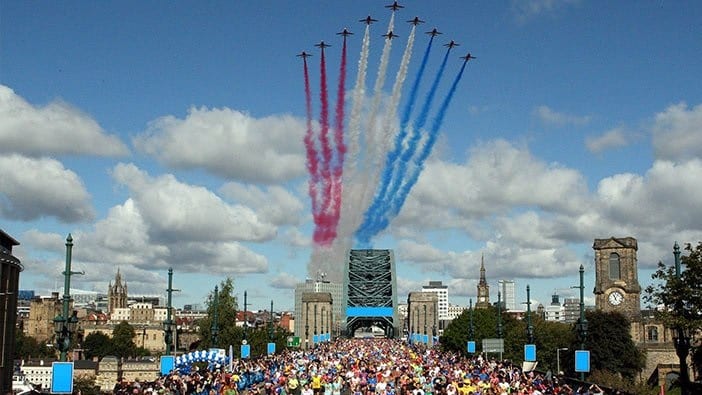 Runners who missed out on the ballot for the Great North Run will have another chance to enter, thanks to a leading North East LGBT+ charity.

And not only are there coveted places up for grabs, but the fitness and nutritional support to be able to run the world’s largest half marathon.

Northern Pride, which organises the popular summer Pride festival, recently unveiled its Pride in Sport campaign, working with Newcastle Council alongside the European Professional Rugby Club and the Heineken Cup.

And as part of the initiative, the charity has launched a SimplyHealth Great North Run Challenge, supported by GO Gateshead, inviting half marathon hopefuls to apply for one of four places to run in the famed race on behalf of Northern Pride.

Those who are successful in their applications will be supported every step of the way in a team lead by the charity’s chair, Ste Dunn.

The final four will receive a 12 month membership to Newcastle Frontrunners – a running club for LGBT+ people and their friends – support from a level 7 athletics coach, nutritional and fitness plans and Northern Pride merchandise.

They will be invited to a workshop for injury prevention advice, receive free yoga and meditation sessions from Gateshead’s Yogabutterfly and discounts on physiotherapy and sports injury treatments at The Performance Clinic – which has studios at Gateshead and Sunderland.

And to keep runners in their best shape, the team will also have access to the state-of-the-art facilities at any one of GO Gateshead seven leisure centres, which includes five gyms, five large pools and more than 200 weekly fitness classes.

“This is a great opportunity for anyone who still wants to get involved with the SimplyHealth Great North Run and do it for a great cause,” said Ste Dunn, chair of Northern Pride.

“We’re going to be supporting our runners throughout their whole journey to help them get ready for the half marathon so we hope people of all skill levels will be encouraged to apply.”

“Health and wellbeing is something we are incredibly passionate about and we hope GO Gateshead will be able to help the runners get in the best possible shape for the half marathon.”

The Pride in Sports campaign aims to make sport more accessible for the LGBT+ community by ensuring that there are safe spaces to take part in team events without fear of discrimination.

Successful applicants are expected to raise at least £400 for the charity, share their progress on social media, attend a number of team training sessions and media events and take part in the Newcastle Frontrunners LGBT+ 5k run on 19 July.

Those who wish to enter should fill out an application form which can be found at https://www.northern-pride.com/campaigns/sport/along with full entry details and terms and condition. The closing date for applications is 8 March

Northern Pride organises a number of events and campaigns throughout the year, including the Northern Pride Festival which takes place from 19 – 21 July at the Town Moor and Exhibition Park – with a star-studded musical line-up still to be announced.

Read More »
December 15, 2021
PrevHave you read?Flippin’ fantastic: Newcastle’s best pancakes for Shrove Tuesday
Next read...Call for people who love Newcastle to promote the city on a national and international stageNext