Drop On The Tyne – Lindisfarne Singer Abseils For Cancer Charity 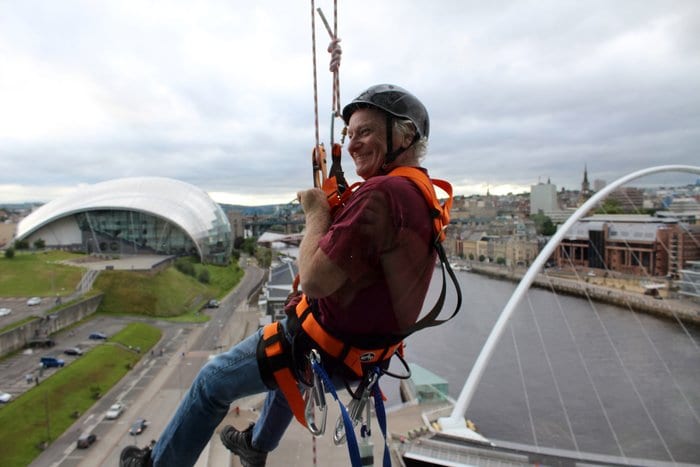 Music legend and neck cancer survivor Billy Mitchell was one of thirty intrepid fundraisers who abseiled down the side of the BALTIC Centre for Contemporary Art, on Gateshead’s Quayside, in aid of the Northern Head and Neck Cancer Fund (HANC).

The charitable fund aims to make life better for those diagnosed with head and neck cancer and raise awareness of the disease.  The fund helps to raise awareness of the cancer to enable faster detection and early stage treatment. It also sponsors annual conferences to help get the most up to date information and research out quickly to those who need it.

Eight years ago, Billy, from Cullercoats was diagnosed with the disease but thanks to early detection and the work of specialised health professionals he has now been given a clean bill of health.

The event was the first time that a public abseil had been attempted down the front of the BALTIC with the fundraisers starting their descent from the roof, passing the viewing space on Level Five and ending their 125 foot long leap safely on the building’s glass roof entrance.

As well as Billy, the thirty participants were made up of nursing staff, doctors and surgeons from hospitals in both Newcastle and Sunderland, dental students from Newcastle University, the ‘Angel flyers’ from The Angel in Corbridge, friends and supporters of HANC, along with Evelyn Weightman BEM, founder of HANC.

Evelyn was delighted with the commitment of HANC’s abseiling fundraisers:

“The day was a great success and I would like to thank all those involved who gave their time and were willing to undertake such a daring leap for HANC.  Huge thanks also to all the staff at the Baltic who made the event go so smoothly and not forgetting all those who sponsored us”

Billy agreed, “ It was a great experience but not one I’d like to repeat in a hurry. The views over the Tyne were stunning when I opened my eyes but it was all worth it knowing that the money raised is going to help save lives.”

Anyone wishing to donate to the abseilers can still do so at: https://www.justgiving.com/fundraising/northernheadneckcancerfund

Steak bake fans rejoice! Greggs’ bakes, baguettes and sweet treats can now be delivered to homes and offices across Newcastle