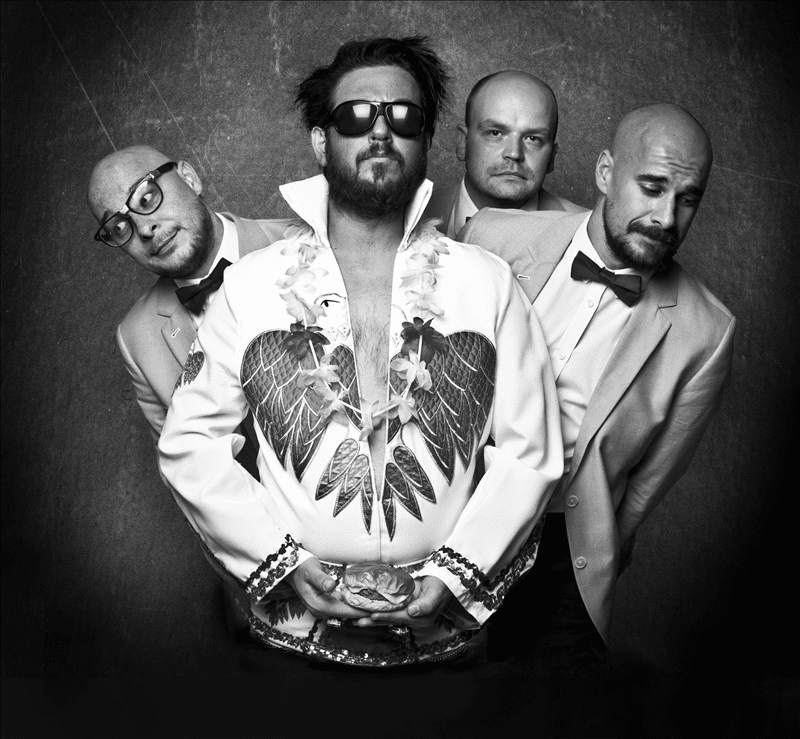 From the bowels of Disgraceland, rock ’n’ roll icons of the afterlife are raised from the dead. The world’s only and finest Elvis-fronted tribute to Nirvana will embark on a nationwide tour throughout September and October, shaking up seven cities across the UK. The four-piece has been receiving rapturous support for their hugely entertaining sweat-soaked shows with a set list compromising unquestionable classics from both Elvis Presley and Nirvana.

You still with us? Course you are, grab a two-minute fix of what an Elvis fronted Nirvana tribute looks and sounds like here, then you’re ready to roll.

Consisting of Elvis Cobain, The Bray Bros and Captain Doom, this mash-up of megastars played their first gig in April 2014, and despite having no official releases, have built an impressive global fan-base.

Elvana has merged the King of Rock ’n’ Roll’s sweet croons with the powerful fuzzy tones of Nirvana, and it really is just as brilliant as it sounds. This unlikely marriage of genres is backed up by an incredible live show, as lead singer Elvis Cobain gives the band the front man it’s been missing since 1994; a performance, full of swagger, sass and swinging hips, an irresistible combination.

Elvana tear through Nirvana’s catalogue, whilst splicing in grunged up sections of Elvis’s finest moments, an audible orgasm of overdrive and old school rockabilly! They released the video for ‘School’ in March, which sees the four piece head-banging in front of a cheeseburger backdrop with ‘Blue Suede Shoes’ in the intro… a prime example of Elvana’s musical genius. Elvanaare definitely not keen on conquering the music industry in any sort of conventional manner, but must be seen to be believed. You really won’t believe your eyes (or ears).