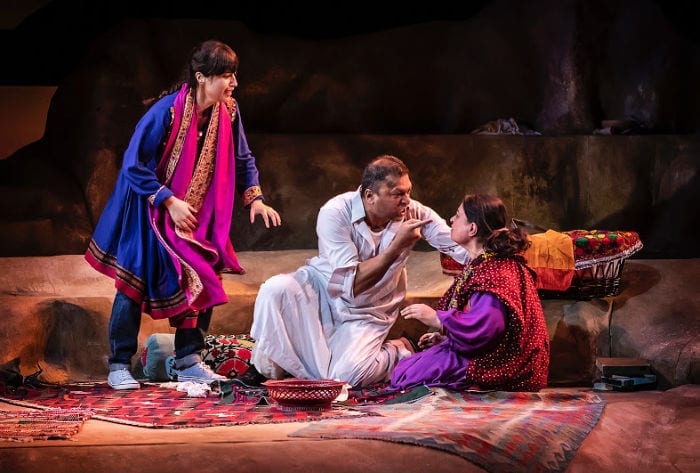 A Thousand Splendid Suns, Khaled Hosseini’s spiritual sequel to The Kite Runner is coming to Newcastle, for a two-week run at Northern Stage.

Playing from 30 May to 15 June, A Thousand Splendid Suns tells the powerful story of three generations of women discovering strength in unity and finding hope in the unlikeliest of places.

Set in 1992 in an Afghanistan ravaged by war, Khaled Hosseini’s international best-selling novel, sees an orphaned Laila is left alone in an increasingly threatening world.

Her older neighbour Rasheed is quick to open his home and takes Laila as his second wife.

Rasheed’s first wife Mariam has no choice but to accept her younger, and now pregnant, rival.

As the Taliban take over, life for all of them becomes a desperate struggle against starvation, brutality and fear, and the two women find themselves unlikely allies.

In A Thousand Splendid Suns, love grows and sustains the human spirit even during the hardest of times.

Playwright Ursula Rani Sarma said: “This play is about the immense strength and endurance of women and how they can survive tremendous suffering to keep those they love alive.

“It is also about how even in the darkest of times and places, love can grow and sustain the human spirit beyond all pain and hard-ship. It’s about friendship and loyalty, courage and selflessness, grief and violence.

“What the play has to say about love, endurance, and survival is very much worth listening to for a contemporary audience. There is beauty and strength at the heart of A Thousand Splendid Suns, and I feel so proud to be part of its evolution from novel to stage.”
Ursula Rani Sarma is a scriptwriter for stage and screen. Her previous credits include Delicious (Sky), the award-winning film Anywhere But Here, Yerma (West Yorkshire Playhouse) and The Dark Things (Traverse Theatre).

Khaled Hosseini is one of the most widely read and beloved novelists in the world, with over 38 million copies of his books sold in more than seventy countries. The Kite Runner was a major film and was a Book of the Decade, chosen by The Times, Daily Telegraph and Guardian.

A Thousand Splendid Suns was the Richard & Judy Best Read of the Year in 2008. Hosseini is currently a Goodwill Envoy to the United Nations High Commissioner for Refugees, the UN Refugee Agency and the founder of The Khaled Hosseini Foundation, a not-for-profit organisation which provides humanitarian assistance to the people of Afghanistan. He was born in Kabul, Afghanistan, and lives in northern California.

A Thousand Splendid Suns is playing from Thursday 30 May until Saturday 15 June at Northern Stage. For tickets see the website.