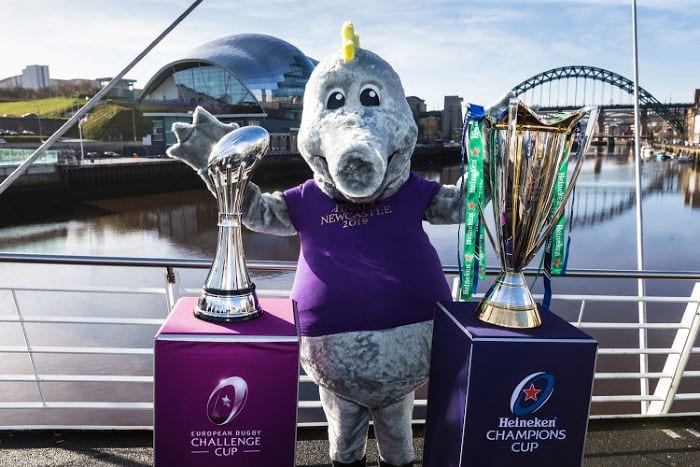 With three months to go until the Heineken Champions Cup Final at St James’ Park, organisers have released further details of what fans can look forward to in Newcastle.

Taking place over the weekend of 10-11 May 2019, Newcastle is hosting European rugby’s biggest weekend, with the Challenge Cup Final on Friday night and Heineken Champions Cup Final on Saturday both being held at St James’ Park.

Fans can expect a carnival atmosphere over the weekend with an official fan zone, Champions Rugby Village, on Newcastle Quayside, as well as more going on throughout the city.

The Champions Rugby Village will run from underneath the Tyne Bridge through to the Millennium Bridge.

There will be family-friendly activities, food and drink stalls and a stage and big screen for entertainment.

The Champions Rugby Village will begin on the afternoon of Thursday 9 May and be open between 11am and 11pm on both Friday and Saturday.

A spectacular firework display will bring it, and the weekend, to a close on 11pm on Saturday night.

As well as the Champions Rugby Village on the Quayside, fans will be able to enjoy events throughout the city at Baltic Square, Blackett Street, Strawberry Place and St James’ Park metro car park.

Newcastle 2019 is the fastest-selling Heineken Champions Cup final ever, and it is on course to be one of the most attended finals ever.

Before the weekend itself fans in the region will be able to get a slice of the action when the Heineken Champions Cup and European Rugby Challenge Cup trophies embark on a tour of the region. Community groups, businesses, rugby clubs and schools will all be part of the Trophies Tour which will take place from Saturday 23 March until Sunday 14 April.

Mick Hogan, Newcastle 2019 event director, said: “The excitement around the Newcastle 2019 Finals is really building now and the plans announced today will further enhance the experience for fans over the weekend.

“There’s no doubt that Newcastle will offer a world-class experience for visitors thanks to the location of St James’ Park right in the city centre and the range of activations – there will be something for everyone; from family-friendly games and events through to bars and big screens for fans.”

“In the build-up to, and during the weekend itself, we are looking to engage with a wide range of communities in the region. As well as the rugby community, we want to attract new people to the sport and build excitement for what promises to be the greatest weekend in rugby.”

Harking back to Newcastle’s seafaring heritage and linking to the city’s coat of arms, the local mascot for the weekend is a seahorse.

Organisers are looking for 250 volunteers, known as The Cast, who will carry out a range of essential tasks to help make the weekend a success.

Cllr Kim McGuinness, cabinet member for culture, sport and public health at Newcastle City Council said: “This is going to be a phenomenal weekend of sport in the city. We’re excited to be hosting this major tournament and we’re getting the city ready to provide a fantastic fan experience and showcasing the very best that Newcastle has to offer.

“Whether you are a rugby fan or not, Newcastle is the place to be this May, with lots of events and activities happening across the city, including a huge fan village on the Quayside. So come down and join us for what is going to be one of the best events the city has ever seen.”

Read More »
December 15, 2021
PrevHave you read?Elmer and friends are the stars of a new exhibition in Newcastle – and the little ones will love it
Next read...From our fighting spirit to our climate: Five reasons we LOVE NewcastleNext