Fish and chips are out of fashion? Surely not Fred…

Flintoff, fish and chips and why Sky TV has its head in the clouds... 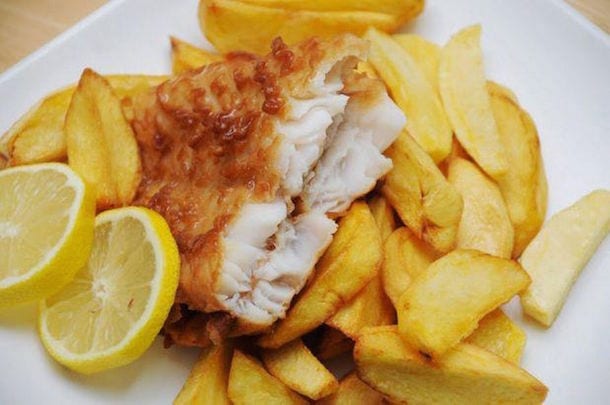 ‘Fish and chips has gone
out of fashion recently’
-Freddie Flintoff

Sky’s Freddie Flintoff; Lord of the Fries is proof positive that TV commissioning is now done totally in reverse, where a puntastic title is drawn on a whiteboard, and a whole team of depressed execs try and build a loosely believable premise around it. Then pick a celebrity, seemingly at random.

Picking Flintoff to front a show about fish and chips is about as obvious as Jamie Oliver presenting a programme about yachting, or Tele Sevalas voicing a tourism board film about Birmingham, although that last one actually happened (Google it).

The real problem with the show, however, is that the central premise of it is total and utter bollocks.

‘Fish and chips has gone out of fashion recently’, deadpans Flintoff to camera. Which is fundamentally garbage.
I live within 100 metres of two fish and chip shops, went to one in the city centre last week, and drove past two branches of Harry Ramsden’s at retail parks over the weekend.

I’ve had fish and chips about half a dozen times so far this year and it’s not even the end of February.

It’s second only to a dire show I saw a year or so ago where presenter and Polpo owner Russell Norman declared that ‘nowhere outside of London really has a burger scene.’

WAKE UP TELLY MAKING PEOPLE. LONDON IS NOT THE CENTRE OF THE UNIVERSE.

What they mean is ‘every chip shop in London is crap and you can only get those pies that look like deflated footballs and come in a wrapper.’

Even the blurb is pap. ‘Freddie Flintoff has a dream. Since childhood he has fantasised about running his own fish and chip shop. Now his dream is about to become reality as he embarks on a most unusual summer adventure.’

I’m pretty sure he fantasised about being a test cricketer didn’t he? Or a rubbish boxer, when he was doing that.

“Fish and Chips have always been one of my biggest vices believe it or not so I’m glad that Sky1 have given me the chance to go on my very own Fish n’ Chip adventure.”

I’m going to choose ‘not’, if that’s ok Freddie. Call me a cynic, but I’m going to predict that Sky approached you with an offer of dicking about in a fish and chip van for the summer, for cash, and you said yes please.

And wouldn’t we all?

No doubt the ‘Lord of the Pies’ follow up has already been commissioned and the Sky execs have knocked off until Easter.

What I would like to see though, is a programme celebrating all the mad shit you used to get at chippies that you just don’t seem to see any more.

The spam fritter. Scraps. The saveloy. The beanie. How about ‘Sarah Beeny’s beanie adventure’, as Britain’s favourite house renovator embarks on a fun trip around Eastern Europe’s most deprived communities introducing them to the popular 1980s North East foodstuff of baked beans surrounded by sausage meat, dipped in batter and deep fried.

There you go. This telly lark is easy.

Sky, the ball is in your court.

Read More »
December 15, 2021
PrevHave you read?Indian cuisine gets Funky!
Next read...Sienna X Spray Tan from £9.99Next