There’s just over one month to go until worldwide smash hit Footloose: The Musical bursts onto the Tyne Theatre & Opera House stage from Tuesday 12th to Saturday 16th July. 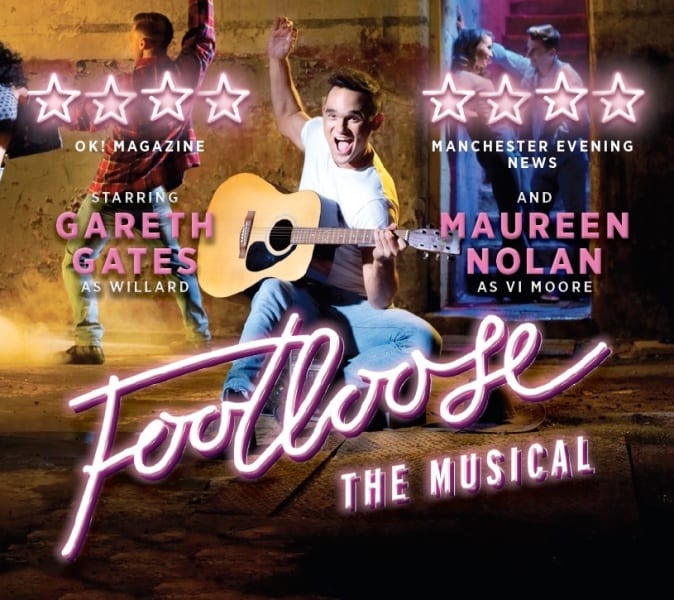 The explosive rock ‘n’ roll musical currently has people dancing in the aisles across the UK, and is guaranteed to get Tyne Theatre goers tapping their toes.

Based on the 1980s screen sensation starring Kevin Bacon, Footloose: The Musical sizzles with the same spirit of youth, rebellion and romance. Footloose follows the story of city boy Ren who thinks his life is over when he is forced to move to a rural backwater in America where dancing is banned. It’s not long before Ren breaks the rules and cuts loose, getting the whole town up on its feet.

Featuring the classic hits including Holding Out for a Hero, Almost Paradise, Let’s Hear it for the Boy and the unforgettable title track, this brand new production of Footloose: The Musical is set to take the world by storm once again.

The spectacular production stars Gareth Gates as Willard and Maureen Nolan as Vi Moore. Gareth rose to fame through the inaugural series of Pop Idol in 2001, going on to sell over 5 million records worldwide and have hits across the globe. Gareth is also the youngest ever-male solo artist to debut at number 1. More recently Gareth has enjoyed a successful career on stage, with credits including Les Misérables, Legally Blonde and Joseph and the Amazing Technicolour Dreamcoat.

Maureen Nolan has been singing with her sisters since she was nine years old, when they became one of Europe’s first girl bands, The Nolans. Best known for their smash hit single I’m in the Mood for Dancing, The Nolans enjoyed phenomenal record sales worldwide, and worked with some of the world’s most respected artists including Frank Sinatra. On stage, Maureen has played Mrs Johnstone in Blood Brothers in the West End and on tour to critical acclaim. She was the fourth Nolan sister to play the role, earning them entry into the Guinness Book of World Records. Other credits include Sadie in Girl’s Behind, Jill in Mum’s the Word and Sarah in The Naked Truth.

When Footloose was released in 1984, it became the highest-grossing February release in US film history, with the soundtrack album ending Michael Jackson’s year long reign at the number one spot with Thriller. The film was nominated for a Golden Globe, and both the title song and Let’s Hear It for the Boy received Academy Award nominations. Footloose: The Musical first opened on Broadway in 1998 where it ran for 709 performances, with a London production following in 2006, opening at the Novello Theatre following a UK Tour.

This brand new incarnation of Footloose: The Musical is produced by the award winning team at Sell A Door Theatre Company – producers of Avenue Q and American Idiot. Footloose is back and it’s better than ever before!

Tyne Theatre & Opera House director Joanne Johnson says: “We’re honored to be able to stage Footloose: The Musical here at Tyne Theatre & Opera House. It’s a huge touring production that has visited some fantastic theatres across the UK, so we’re in very good company! With us now being a completely independent company, being able to host a production as big as Footloose is very special for us. It’s going to be a spectacular, energetic show and we hope to get the North East dancing!”

TICKETS
Tickets: £22.50 – £32.50. Group booking discount available. (plus booking fees when booking online and over the phone) Tickets are available at: http://tynetheatreandoperahouse.uk/events/footloose-the-musical/

Read More »
December 15, 2021
PrevHave you read?North East School Children Given A Taste For Thailand
Next read...Living Ventures sell the brand behind The Botanist for £50mNext