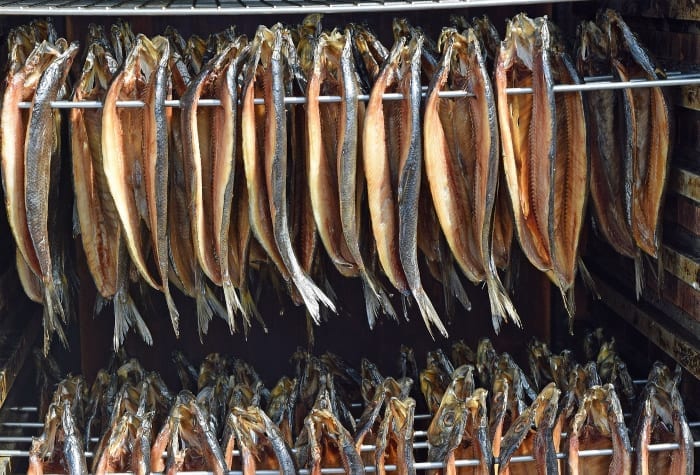 It’s no secret that us Geordies love our food. We’ve got tonnes of amazing eateries, food markets and local suppliers and with a food scene that vibrant it should come as no surprise that we’ve got a few delicacies unique to Newcastle and the places surrounding it.

Geordie cuisine is all about food that’s tasty, wholesome and bound to fill up even the hungriest of bellies though a few of our local dishes may be an acquired taste for some palates. In fact, five of the delicious delicacies coming up were once listed amongst the UK’s most weird and wonderful regional food.

Luckily, our local grub leans far more towards the wonderful than the weird but whatever your view on Geordie cuisine these dishes are a must-try whether you’re a native or just visiting. From giant-sized bread buns to ‘Geordie caviar’ (no fish eggs involved), these are the local dishes that define our region’s cuisine.

Imagine a bread bun but on an epic scale and you’ve got a good idea of what the stottie is all about. Typically measuring around 12 inches across and nearly two inches thick, the wonderfully stodgy bread derives its name from our local word ‘stott’ (meaning ‘to bounce’) and was so named because a stottie with optimal stodginess should bounce if you drop it.

You can pretty much stuff a stottie with whatever kind of filling you like for a super-size sandwich but many swear the best filling is ham and pease pudding … but more on that later.

Where to try it: For some of the best stotties in the Toon look no further than Pink Lane Bakery who cook up fresh batches of white and wholemeal stotties daily.

Typically made with flour, milk, baking powder, butter, lard, salt and currants, it’s rolled into a fatty dough before being fried. The singin’ part of its name apparently refers to the sizzling sound the fatty ingredients make as they cook. The latter part, of course, is a local term of endearment.

Where to try it: Head to Hinnies in Whitley Bay where the Geordie comfort food inspired menu features singin’ hinnies served with plum jam and vanilla ice cream.

Considered by many a top chef to be the finest kippers in all of Britain, Craster kippers are North Sea herring marinated in brine and cured over smouldering oak and whitewood in a smokehouse for up to 16 hours.

As their name suggests, Craster kippers come from the small fishing village of the same name on the Northumberland coast.

Where to try it: Head straight to the source, of course! Family business L. Robson & Sons own the only smokehouse in Craster and having been smoking fish for over a century. Grab some kippers at the smokehouse shop or try a kipper dish at the Robson family-owned Craster Seafood Restaurant.

Breakfast-friendly fare at its finest, Tyneside floddies are a potato cake similar to rösti or hash browns that are traditionally made from grated potato, finely chopped onion and a bit of chopped streaky bacon.

Team with some sausages and eggs and you’ve got a Geordie twist on the full English breakfast to kickstart your day.

Where to try it: Top Newcastle restaurant Blackfriars has a couple of versions. Its canape menu features a floddie and brown sauce combo while the a la carte menu features floddies served with fried duck egg and spinach.

The importance of pease pudding in Geordie cuisine cannot be underestimated. Usually made by boiling split yellow peas with a joint of ham before draining and mashing into a hummus-like paste, it’s a local foodstuff so beloved some even refer to it as ‘Geordie caviar’.

As we’ve already mentioned it’s best paired with ham and stuffed in a stottie but it’s also best mates with the saveloy sausage – a combination so legendary it was even name-dropped by hungry orphans in Oliver’s Food Glorious Food.

Where to try it: Pete’s Puddin’ offers a range of pease pudding from the classic recipe to Brown Ale and cheese infused varieties and even a few vegan versions. Buy online or find Pete’s Puddin’ at events like the Tynemouth and Quayside markets.

Once referred to by the BBC as ‘the slightly rugged brother’ of the French dish potato Dauphinoise, pan haggerty is a deliciously filling recipe consisting of layers of potato, onions and cheese cooked until perfectly crispy.

There are lots of different takes on the Geordie delicacy too with some adding carrots, cabbage or bacon. It’s just as delicious as it sounds and a dish sure to keep your cockles warm during the arctic North East winters.

The saveloy dip elevates the humble sausage sandwich to epic proportions. It begins with a bread bun sliced in half and dipped in gravy before it’s spread with a generous layer of our old friend pease pudding.

Add a piping hot saveloy sausage, a delicious dollop of sage and onion stuffing and a bit of English mustard to finish and voila – a saveloy dip is born.

Where to try it: Long-standing local family butcher chain Dicksons is the home of the saveloy dip and with 30 shops across the North East nabbing yourself one is easy.

An article about Geordie cuisine wouldn’t be complete without mentioning trusty bakery chain Greggs. Established in Gosforth in 1951, the long-standing institution’s pasties, sausage rolls and steak bakes are a fast food staple in the North East.

More recently Greggs has added fancy, progressive stuff to its menu like Fairtrade coffee and vegan sausage rolls. Whatever next!

Where to try it: Any of the 1,850 branches of Greggs across the country would be a good place to start. Any Geordies who are feeling extra lazy can take advantage of Greggs’ new Deliveroo service available in Newcastle.

Lindisfarne oysters date back to the late 14th century when monks first set up oyster beds in the waters off Holy Island.

Since 1953, they’ve been farmed on the shores of the Lindisfarne National Nature Reserve by the Sutherland family who supply some of the best restaurants in the North East region and further afield.

Where to try it: Stop by the Saltwater Fish Company at Fenwick where you can pick them up for £1.10 apiece. Alternatively, head to the eatery’s fish bar where they’re deliciously paired with things like spicy sausage, shallot vinegar or yuzu mignonette.

Founded in Newcastle in 1947, the Tudor Crisps brand later became known for its finger-lickingly good flavours like gammon and pineapple, pickled onion and tomato sauce alongside a few rather unusual varieties like chocolate, mint sauce and kipper.

Sadly, Tudor Crisps are no longer with us but are fondly remembered by their classic 70s ad campaign in which a young lad was bribed with a ‘canny bag o’ crisps’ into delivering newspapers to the now demolished Dunston Rocket tower block.

Where to try them: Unfortunately, you’ll need to build a time machine and travel back to at least 2003 which was when Tudor Crisps were last on the shelves. RIP, Tudor Crisps.