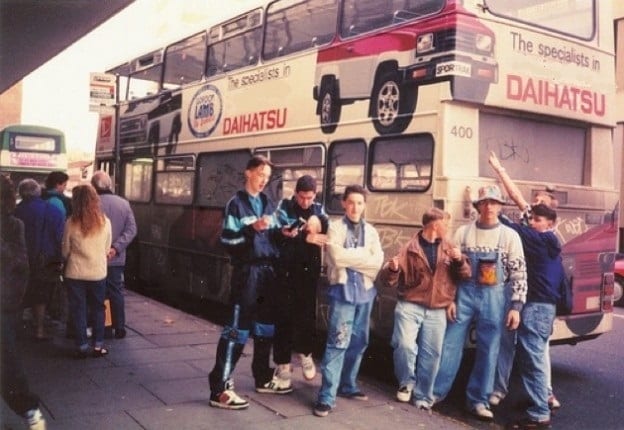 We Geordies are a pretty stylish bunch these days, however, in the 80’s/90’s, was this always the case? Those days we relied on Music, television and hearsay to guide/misguide us in the latest trends reinforced by a limited collective of high street shops and mail order catalogues to kit us out. Geordie Jeans and Littlewoods were our fashion staple, rather than today’s ‘style safety net’ of internet shopping and social media which constantly keep us in touch with what’s hot and what’s not.

Were we really dressed like ‘Charvas’, or were we just pioneers of edgy Streetwear? I would like to think it was the latter…but I may be just kidding myself! Here’s a list of some prime examples of 80’s/90’s wear which will make you laugh and cry at the same time…

1. Troop or British Knight?
Troop and British Knight were the ultimate 80’s/90’s hip hop brands. These crazy high-tops featured gold badges and huge branding and certainly had a presence, that defied good taste. Nevertheless, whichever the brand we donned, they made us feel like the ‘Bee’s Knee’s’.

2. Naf Naf or just Naff?
It was expensive, colourful and splattered with branding- Naff Naff clothing was a big hit for those who could afford it. For the less discerning Geordie – Naffco 54 was the cheaper and even more hideous alternative.

3. Bell Bottom Jeans and Joe Bloggs tees from Plus Four
Plus Four was the Geordie jean shop favourite, where pretty girls served shoppers and trendy customers came from across the region to buy their loose bottom jeans and 501s. Inspired by the Manchester Indie scene – Joe Bloggs clothing was a big hit with the ‘Ian Brown’ wanabees.

4. Kappa, Kappa and more Kappa
Kappa began life as a prestigious Italian sportswear brand. Worn only by elite sportspersons, this fine label was originally an expensive, exclusive and sort after brand…Then the 90’s happened! An almost overnight event caused Kappa to plummet to the irreversible depths of fashion faux pas as Charvas some how found a way to obtain the brand and damn it forever! Bright pink shell suits did not help its cause!

5. Grolsch bottle caps in our shoes
This was a look inspired by the 80s band Bros. Basically you would get two Grolsch bottle caps and put one on each of your shoes, attaching them through the shoelace holes and then when you walked around they kind of click clacked up and down. They were eventually banned at my school, all the kids were into it…I believe some fashion statements should be left well in the past!

7. Iron Maiden tees and skin tight jeans were a must in Old Eldon Square
Waves of black with the odd colourful Mohican were synonymous with Old Eldon Square in the 90’s. Gangs of Goths and Heavy Rock fans flocked here, especially on weekends. Clad in aged denim, ripped tees and Doc Martin boots, the non conformists gathered in their hundreds armed with cheap cider and Regal Kingsize.

8. If it was good enough for Tom…
After watching the 80’s blockbuster ‘Top Gun’, we all aspired to be fighter pilots who rode motorcycles and got ‘the girl’. Unfortunately, this was not feasible (For many obvious reasons). Therefore, we had to settle for a copy of the soundtrack and a cheap alternative of that famous flying jacket. If I said that I wasn’t one of these individuals, I would be lying…Dark days indeed!

9. Swatch watches were plastic fantastic
They were affordable, reliable and everyone had one! The unexpected appearance of an affordable, Swiss made, plastic watch turned the watch world upside down. Having said that…The design team responsible for creating some of those outrages styles must have been either colour blind, influenced by hallucinogenic drugs or both.

10. Overalls aka Dungarees
Even now, they pop in and out of fashion, though they never hang around for very long. There’s no disguising the fact that dungarees made us look like Prisoner Cell Block ‘H’ Extras….There was really no excuse!