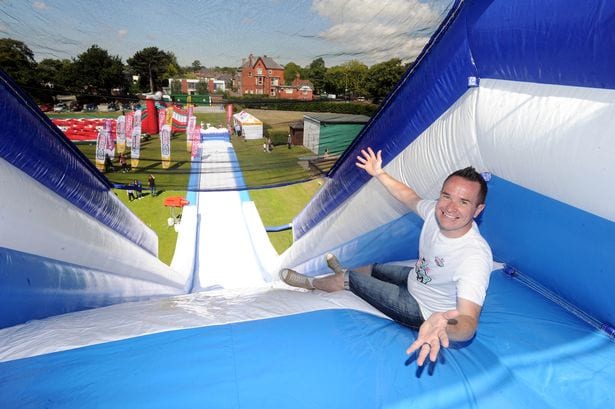 Smile For Life has been chosen as the event’s partner charity for a second year, after a hugely successful launch in 2015 raising almost £6,000 to provide specialist equipment, much-needed holidays and even work experience in the charity’s Café Beam.

Gung-Ho! comes to Newcastle Racecourse on July 2nd and it’s expected that this year will be bigger and better than ever. Alex, who will host the race on day, said: “The Newcastle race was an amazing day. It was my favourite of all our events last year.

“Straight afterwards we said we needed to bring it back to Newcastle next year. It was a no-brainer to have Smile For Life as the partner charity again, they brought so much enthusiasm and Gung-Ho! to the day and were so pleased to be there, it was just great.

“Smile For Life is a fantastic charity that provides services that I have not seen enough of in this country. Café Beam is brilliant too – it is such a good idea. When I spoke to the kids who were working there they told me just what a confidence boost it gives them. It gives them the opportunity to be themselves in the world and you just can’t get better praise than that.”

Alex came up with the idea for an inflatable obstacle course while sat in front of the TV. The idea spawned a new craze with around 16,000 people taking part in Gung-Ho!’s first three events in 2015. The success has led to 12 events being held in 2016 across the UK.

Cash was raised for Smile For Life from charity volunteers stewarding the course on the day in exchange for an hourly pay, collection buckets and sponsorship from runners.

Alex added: “Smile For Life is so small, local and unassuming as a charity – but wow what a great effect they have on the wider community. I want to encourage everyone taking part in Gung-Ho! to support this amazing cause, we are so excited to have them on board as they encompass Gung-Ho! and everything that we are about.”

Paula Gascoigne, CEO of Smile For Life Children’s Charity, said: “We are delighted to be involved with Gung-Ho! as the partner charity for Newcastle. It will be a fantastic event, last year was so much fun and this year is sure to be even bigger and better!

“Some of the young people we support are still talking about Gung-Ho! after taking part or helping with volunteering on the day. The great thing about Gung-Ho! is that it’s accessible for all, it’s not a competitive race and so it’s something that we can all be a part of.”

Paula added: “We were astonished that we raised almost £6,000 from last year’s event, people were so generous and it really helped to raise awareness of what Smile For Life does in the north east and who we support. “We are so grateful to have been chosen as the charity once again and hope that people continue to show their support, going Gung-Ho! for all of those young people in the region who really need it.”

INFO
For more information visit: www.begung-ho.co.uk. Check out Gung-Ho! updates by searching ‘Gung-Ho! on Facebook and on Twitter, at @begungho.

TICKETS
Tickets cost £30 and are available at: www.begung-ho.co.uk but prices go up shortly, so sign up quickly to ensure you don’t miss out.