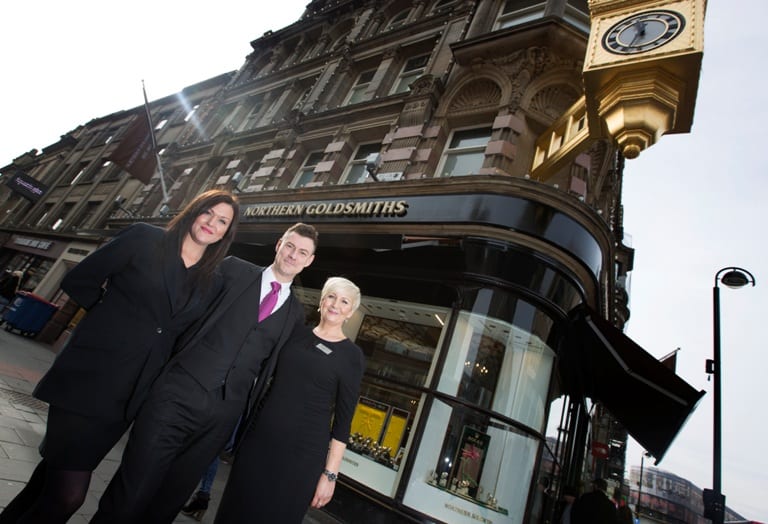 LUXURY high street jeweller Goldsmiths has announced new appointments in four of its Newcastle and Gateshead stores this month.

Lindsay Chapman, from Annfield Plain in County Durham, has joined the Goldsmiths team at intu Metrocentre, located in the Green Mall just off Town Square, bringing with her 12 years of retail experience from the Arcadia Group and Zara, as well as her most recent role at JD Sports.

Lindsay said: “Goldsmiths is a completely different experience to that which I have had in my previous positions, but I felt ready for the challenge and I’m thoroughly enjoying it. “Building a rapport with our customers is so important when they come in to store. Whether it’s to celebrate an engagement, anniversary or simply to buy a present for that special someone, being able to share such significant milestones with them is why I love working for the brand.”

With 28 years of experience working for Goldsmiths, Jason West is a well-known face at the company. He has returned to his original store to take up the general manager role at Reid & Sons, established in 1778, after five years at Northern Goldsmiths.

Jason, 43 from Newcastle, said: “I am thrilled to be back working with the team at Reid & Sons. I’ve got a passion for working in retail and this showroom in particular, which has such a long-standing heritage attached to it, so it’s a real pleasure. “Our customer journey is of utmost importance and this is something that I will be developing closely with the staff to implement throughout store relations.”

Sharon Devlin is now heading up the team at Northern Goldsmiths after 20 years with the Goldsmiths brand. Originally from Glasgow, Sharon relocated to the North East two years ago to fulfil the role of branch manager at the intu Eldon Square store.

Sharon said: “The working environment at Goldsmiths is fast-paced but ultimately, hugely rewarding.“I feel very privileged to be part of a company that has such strong vision and values, which always leaves me feeling motivated – something I want to continue to nurture in my new team.”

The final appointment completing the changes is Peter Britland from Whickham, who has moved from the intu Metrocentre branch to the recently-refurbished intu Eldon Square showroom.

INFO
Goldsmiths is the UK’s largest high street retailer with over 100 stores nationwide and online at: goldsmiths.co.uk.