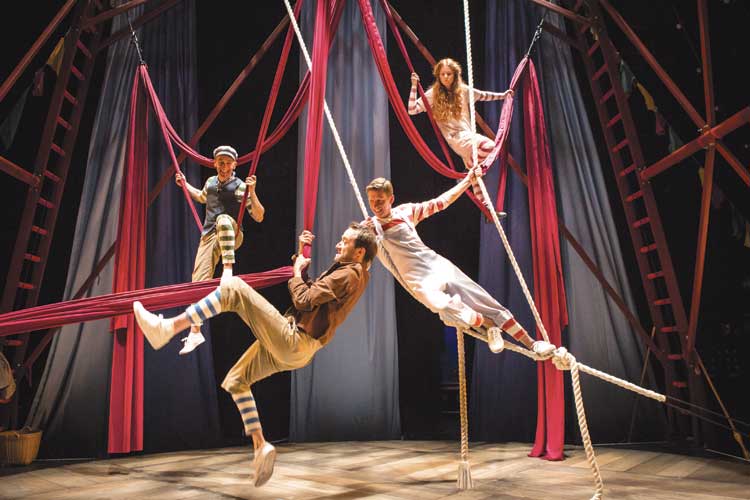 A favourite among young readers, Jacqueline Wilson’s Hetty Feather is now set to captivate children at Newcastle Theatre Royal when the heart-warming story is brought to life in a production packed with acrobatics, circus skills, live music and song.

After a sell-out, critically acclaimed West End run in 2014, this Olivier Award nominated production of Hetty Feather comes to the Theatre Royal from 8 – 11 October, as part of a major national tour.

Phoebe Thomas reprises the role of Hetty Feather in this tale that sees Hetty escape from the Foundling Hospital and the terrifying Matron Stinking Bottomly and encounter a world of adventure including Tanglefields Travelling Circus and the scary streets of Victorian London in her quest to find her real mother and a true family of her own.

Author of the original Hetty Feather book, Jacqueline Wilson, said: “I am so thrilled that Hetty Feather has become a stage play! I’ve written exactly one hundred books but Hetty Feather is my number one favourite character and I’m delighted that she will be back on stage again. “The team behind the production have done a magnificent job bringing the book to life and I’m so pleased that the forthcoming tour will allow even more people to see this wonderful show.”

And Jacqueline Wilson will be paying a visit to Newcastle Theatre Royal herself on Thursday 8 October, when she will be talking about her bestselling books and characters, from Tracy Beaker to Hetty Feather, as she launches her latest Hetty Feather novel Little Stars. (This event is ticketed separately to the show).

Hetty Feather is published by Random House, and the first in a trilogy of books which includes Sapphire Battersea and Emerald Star – the series has been hugely successful not just in the UK, but also internationally. It is currently being adapted as a new 10 part television series for CBBC, due to be aired later this year.

Jacqueline Wilson is one of Britain’s most popular authors, selling over 38 million books in the UK alone. Her most successful and enduring creation is the Tracy Beaker series, which has also been adapted for television and scenes for which were filmed at locations across the North East. In 2002 she was awarded the OBE for services to literacy in schools and in 2008 she became Dame Jacqueline Wilson. In the same year she became the Foundling Museum’s first Coram Foundling Fellow. From 2005 to 2007 she was the Children’s Laureate. Her 100th book Opal Plumstead was published last year.

The production team for Hetty Feather includes Emma Reeves (playwright) who has worked with Wilson on a number of projects, most notably writing the television adaptations for the Tracy Beaker series. Producer Sally Cookson is an Associate Artist at Bristol Old Vic, where her productions have included Jane Eyre (transferring to the National Theatre later this year) and her on-going collaboration with Travelling Light Theatre has resulted in her directing over ten productions for the company, including the Olivier Award nominated Cinderella, Boing!

WHERE & WHEN
Hetty Feather appears at Newcastle Theatre Royal from Thursday 8 – Sunday 11 October 2015.

TICKETS
Tickets from £11 (pay 50p less per ticket when you book online). Tickets can be purchased from the Theatre Royal Box Office on 08448 11 21 21 (Calls cost 7ppm plus your phone company’s access charge) or book online at: www.theatreroyal.co.uk.

Read More »
December 15, 2021
PrevHave you read?Twenty One Pilots to Play Newcastle O2 Academy
Next read...Come together, and join the worlds largest coffee morningNext