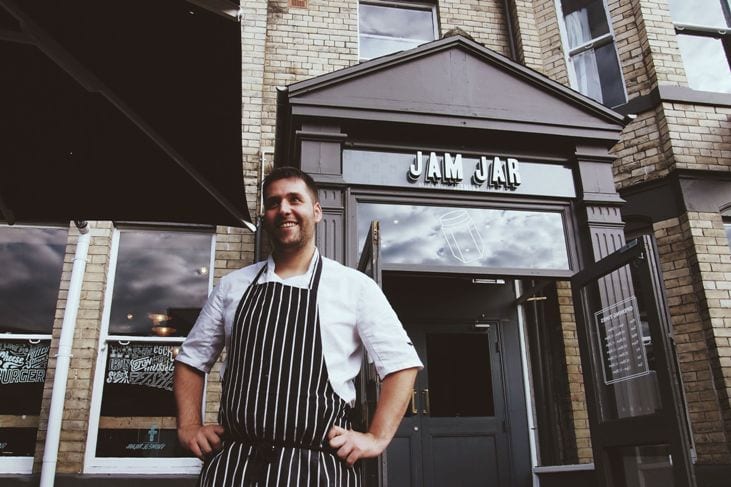 A local head chef is celebrating a new position at a popular Jesmond restaurant where he will build on its food offering as it marks its first anniversary. Steven Foister from Low Fell, Gateshead has joined Jam Jar on Osborne Road, which burst onto the Jesmond dining scene last year, offering brunch options, lunch and evening meals in a contemporary, relaxed space with character and an industrial edge. Jam Jar won a Silver award in the Best Food Bar category in the Licensed Trade International Awards last month.

Steven has worked at some of the North East’s best known restaurants including Terry Laybourne’s Café 21, The Cherry Tree in Jesmond and Sidney’s in Tynemouth, as well as spending time honing his skills at The Ivy in London.

“I’m looking forward to bringing some fresh ideas to the menu and developing the range and quality of dishes on offer.”

Steven is also introducing a bar snacks menu including home cured pastrami and homemade brown ale bread, and is revamping the daily specials menu, featuring such dishes as clam and scallop chowder and artichoke crisps. All food is made on site using local, seasonal food.

Desserts, which are made fresh daily, include such options as the Jam Jar Mess – the venue’s original take on Eton Mess, baked vanilla cheesecake with raspberry jam, chocolate brownie with vanilla ice cream, and pancakes with maple syrup and ice cream.

“The timing couldn’t be better as we’re now taking Christmas lunch and dinner bookings, so we’re gearing up for a busy festive season.”

Jam Jar pride themselves on being a welcoming, homely venue at all times of the day – whether people just want to pop in for a morning coffee or to start their night out by enjoying our renowned burgers with friends.

Jam Jar also boasts an extensive drinks selection, including cocktails served in a jam jar such as More than Mojito Jam, Mexi Jam and Tea Time Jam, as well as a wide range of craft beers, spirits, continental lagers and rare liquors. Jam Jar pride themselves on being a welcoming, homely venue at all times of the day – whether people just want to pop in for a morning coffee or to start their night out by enjoying our renowned burgers with friends.

Good look Steven, stick around and we’re sure you will be a huge hit at Jam Jar!