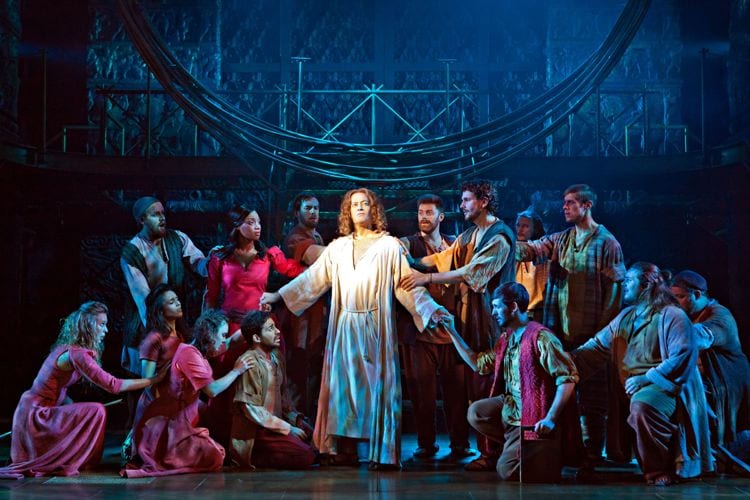 The explosive new production of Jesus Christ Superstar, Tim Rice and Andrew Lloyd Webber’s ground-breaking rock opera, is set to entertain audiences when it comes to Newcastle Theatre Royal from Mon 14 – Sat 19 September 2015, as part of its major UK tour.

Leading performer Glenn Carter returns as Jesus, a role he has played in the West End, on Broadway and in film. His extensive musical theatre credits include leading roles in Whistle Down the Wind, Les Misérables, Joseph and the Amazing Technicolor Dreamcoat, Godspell and Merrily We Roll Along.

Australian star Tim Rogers made his UK stage debut 15 years ago and hasn’t looked back since. Tim’s musical theatre credits include The Man in Whistle Down the Wind (UK Tour and West End), West Side Story, Jersey Boys, The Full Monty, Aspects of Love and the title role in Jekyll & Hyde at the Union Theatre. Most recently he starred in Carousel at the Arcola Theatre London.

Bob Tomson and Bill Kenwright reunite to direct Jesus Christ Superstar, a partnership that has seen them at the helm of iconic musicals including Evita (in the West End and on tour) and Blood Brothers; a show they have directed for almost 30 years, scooping up no less than four awards for best musical in London and seven Tony Award nominations on Broadway.

Jesus Christ Superstar exploded onto the musical scene in 1971. Stunning audiences, it changed the face of musical theatre forever. Tim Rice and Andrew Lloyd Webber’s rock opera tells the story of the last seven days in the life of Jesus through the eyes of Judas Iscariot.

As compelling today as it was at its inception over 40 years ago, Jesus Christ Superstar features some of musical theatre’s most legendary songs from I Don’t Know How to Love Him, Everything’s Alright, Gethsemane and Superstar.

TICKETS
Tickets from £13 (pay 50p less per ticket when you book online). Tickets can be purchased from the Theatre Royal Box Office on 08448 11 21 21, (calls cost 7p per minute plus your phone company’s access charge) or select your own seat and book online at www.theatreroyal.co.uk

Read More »
December 15, 2021
PrevHave you read?An Evening with Gazza comes to Tyneside
Next read...House of Savannah rivals out of town spa offeringNext