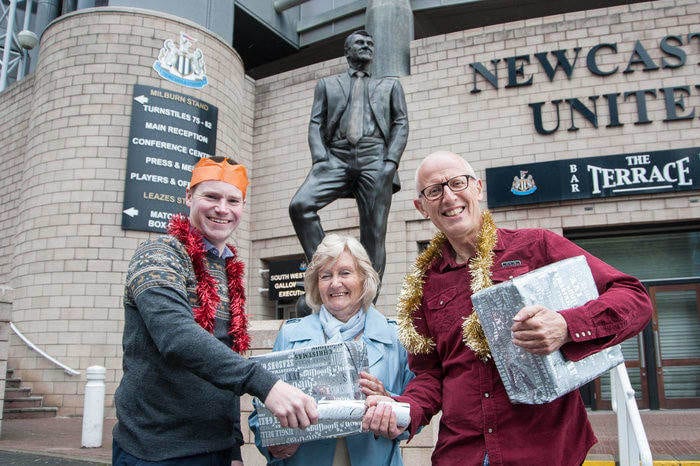 Christmas arrived early in the north east this year as festive preparations were launched for a star studded, spectacular Yuletide concert.

Organisers of the fifth annual Christmas at the Cathedral concert have chosen to raise funds this year for one of the region’s most endearing charities; The Sir Bobby Robson Foundation and the show promises to be bigger and better than ever.

Vital funds will be raised from the concert as wealth of celebrity stars perform songs, readings and comedy sketches while choirs will sing both traditional festive songs and Christmas Carols. The concert will take place on Thursday, December 15 at St Nicholas Cathedral in Newcastle.

Jonathan Wallis from Barnard Castle is organising the event but as is the custom, he isn’t giving away any details of who may or may not be appearing.

“We like to keep the audience guessing right up to the night. It adds to the surprise and magic of Christmas. However, in previous years, the sell out audiences have been entertained by established stars such as Tim Healy, Chelsea Halfpenny, Charlie Hardwick, Denise Welch and Rebecca Root so that gives you a feel for the caliber of talent on show.”

Ex Lindisfarne front man Billy Mitchell will be the evening’s compere while drummer Ray Laidlaw will once again produce the show that has always delighted the packed out audience.

Ray, said: “This is our fifth year and for the first time, our chosen charity is the Sir Bobby Robson Foundation. Sir Bobby was an amazing person and his charity has helped many people in the region. We are looking forward to raising even more awareness of the work that the charity does as well as raising funds so that they can continue doing their valuable work.”

Lady Elsie says: “Like many people, Christmas is one of my favourite times of year.  There’s a sense of togetherness that always makes it special.

“That togetherness can be with family, friends, or, in this case, people coming together to raise money for Bob’s Foundation.

“This promises to be a memorable and very Christmassy event.  I’m told it will be funny, uplifting and emotional.  And given the people involved in organising the event, I have no doubts it will be all of those things.”

Christmas at the Cathedral will take place on December 15 at 7pm. Tickets £10 plus booking fees are now available from the Theatre Royal box office on 0844 811 2121. A small amount of VIP tickets are also available.

Any companies wishing to support the event either through sponsorship or by VIP ticket packages, should email:jonathanwallis@georgefwhite.co.uk