Magnifico! Opera North is back in town – bringing adventure, tragedy and wicked comedy 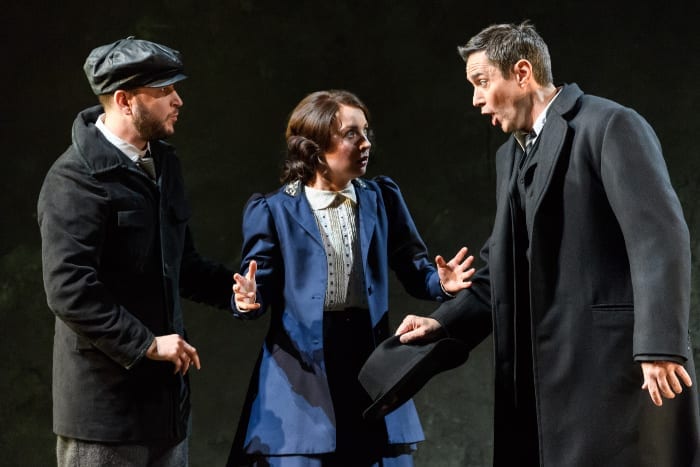 Opera North is coming back to Newcastle Theatre Royal from next week with a selection of performances sure to wow North East audiences.

Opening the season is a magical new production of Mozart’s much-loved opera The Magic Flute directed by James Brining from Leeds Playhouse.

Samantha Hay takes on the role of Queen of the Night, with Gavan Ring (Figaro, The Barber of Seville, 2015) as Papageno the bird-catcher. Early music specialist Robert Howarth conducts.

And there will be a special shortened version of the Magic Flute to engage local school children with opera performed at a special schools’ matinee at the theatre on Wednesday 13 March.

For even younger children there are three performances of The Mini Magic Flute at Seven Stories in the Ouseburn Valley on Saturday 16 March. This interactive 30-minute retelling of the story features a trio of opera singers, accompanied by an accordionist, and is preceded by a special craft activity for all the family.

Next,  Janáček’s wildly beautiful tale of temptation, passion and guilt, Katya Kabanova comes to the stage on 14 March.

With a weak husband and overbearing mother-in-law, Katya does her best to conform to the stifling expectations of her community, but when her husband goes away on business, temptation proves impossible to resist.

As her world unravels, Katya’s intense emotional states are charted by Janáček’s exceptional score, from the lyricism of her dreams to her longing for her lover Boris and the anguish of her guilt.

One of the country’s most distinguished conductors, Sian Edwards makes her Opera North debut with a cast headed by Stephanie Corley as Katya. American tenor Harold Meers sings the role of Boris, Heather Shipp is the formidable mother-in-law Kabanicha, and Andrew Kennedy is the spineless Tichon.

Completing the season on the Saturday is a dance/opera double bill created in association with Phoenix Dance Theatre.

Stravinsky’s groundbreaking The Rite of Spring is reimagined for Phoenix’s ensemble by Haitian-born choreographer Jeanguy Saintus. For his UK debut, he has taken his inspiration from the Vodou rituals of his homeland to create a truly mesmerizing staging.

The full Orchestra of Opera North performs Stravinsky’s famous score, which sounded so revolutionary at its premiere in 1913 that it sparked a riot.

Offering a unique chance to experience two art-forms in one evening, The Rite of Spring is paired with Puccini’s short – and only – operatic comedy Gianni Schicchi.

Scheming relatives gather round the deathbed of a rich man, each laying claim to his fortune, before coming to the questionable decision to call in local conman Gianni Schicchi for help. Rich with vivid characterisation and colourful music, this mini-masterpiece includes one of the greatest soprano arias in opera, O mio babbino caro.

Richard Burkhard (Tonio, Pagliacci, 2017; Figaro, The Marriage of Figaro, 2015) returns to Opera North in the title role with the supporting cast including Tereza Gevorgyan as Lauretta, Diego Silva as Rinuccio and Leah-Marian Jones as Zita. Scottish conductor Garry Walker conducts both pieces.

Read More »
December 15, 2021
PrevHave you read?Don some neon and join the This Girl Can 5k for International Women’s Day
Next read...Theatre Review: Wonderland at Northern StageNext