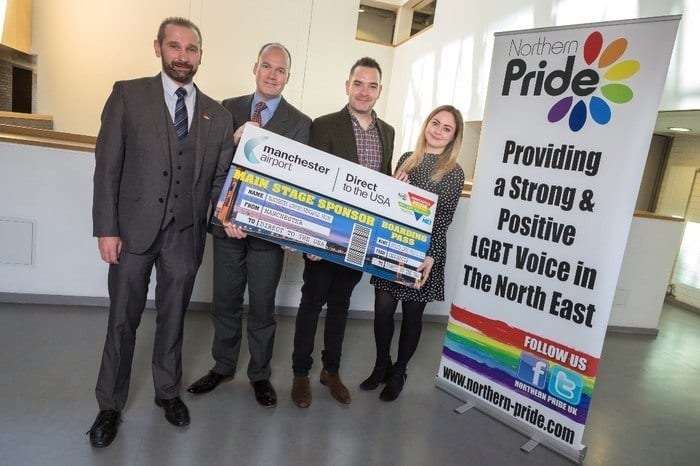 Manchester Airport, which is the UK’s third largest, has climbed on board as main stage sponsor at this year’s tenth Newcastle Pride 2017, which is also being supported by main festival sponsor, Newcastle business improvement district, NE1.  It is the third UK Pride sponsorship to be announced by the global gateway for the North, with Birmingham and Manchester already announced.

The popular festival, which attracted more than 73,000 visitors and contributed more than £10.4m to the economy in 2016, is returning with its largest ever line up on the 21 to 23 July weekend at Newcastle Town Moor.

Mark Nichols, Chair of Northern Pride, which organises Newcastle Pride, said: “The main stage programme is one of the most popular aspects of Newcastle Pride and without the support of Manchester Airport, it wouldn’t be possible to offer the amazing array of acts we have in store.

“As it is our tenth birthday year, we’re really going all out with the line-up and we hope that people will come and enjoy everything the festival, and the North East as a whole, has to offer.

“We’re absolutely delighted that an airport as high profile as Manchester has realised the popularity of Newcastle Pride and is getting involved in what we hope will be our biggest year yet.”

Patrick Alexander, Manchester Airport’s Head of Marketing, said: “We are delighted to be working with Newcastle Pride for the first time to support such a worthwhile event.

“We have sponsored other Prides in the UK and thought it was time to widen our reach to showcase the great work undertaken by Manchester Airport, with many of our passengers coming from the North East.  Especially with the new direct rail service to our train station, Manchester Airport is now closer than ever for residents of Newcastle.

“We’re looking forward to working closely with the Newcastle Pride team on what I am sure will be a world class event.”

On the lead-up to the Newcastle Pride weekend, there will also be satellite events running at venues across the city during June and July, including a black tie ball and LGBT youth prom.

Newcastle Pride 2017 has confirmed that NE1, the city’s Business Improvement District, is back on board for the third year as festival sponsor.

Manchester Airport with more than 26 million passengers has over 210 destinations served by more than 70 airlines. With a catchment area spanning as north as Scotland, south to the West Midlands, west to Wales and east to Yorkshire, it continues to add passengers and international routes. In the last year alone it has added direct routes to the likes of Beijing, Houston, Los Angeles, Boston, Mauritius, Phuket, San Francisco and Boston. Manchester is the only UK airport outside of London to offer these routes.

Further details about Manchester Airport can be found at: http://www.manchesterairport.co.uk/

sdfgsdfg wert wert992 I Love Newcastle Magazine would love to hear your thoughts about the above post, so please feel free to share them in

Read More »
June 15, 2021
PrevHave you read?Strictly Stars To Burn Up The Dancefloor In New Live Show
Next read...Gallery Café Celebrates Mother’s Day With A Sweet TreatNext