Comic and star of Mock the Week Ed Gamble is to perform at The Bottle Shop Bar and Kitchen Newcastle. 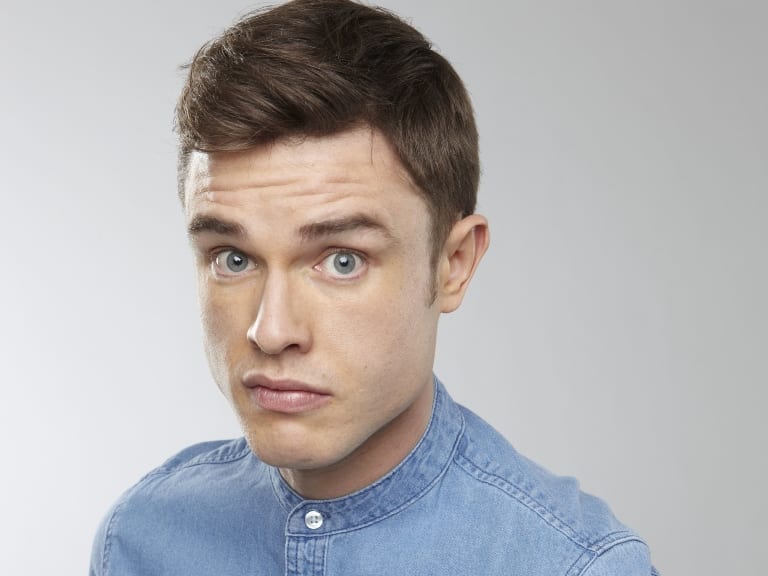 Gamble will be previewing his brand new show Stampede at the Newcastle city centre venue on Wednesday 1 June 2016.

The show marks a rare appearance in the North East for the fast-rising TV comic as he headlines the venue’s increasingly popular comedy night.

Described by The Guardian as possessing “an ability to open his mouth and spontaneously say something hysterically funny”, comic, writer and actor Gamble has most recently been seen starring in BBC America’s first original comedy commission Almost Royal. Following its success in the US, the show was later transmitted on E4 and returns for a second series in 2016.

A charismatic and enormously likable performer, Ed bagged a Chortle Award in 2014 for Best Compere, and has provided national tour support for Greg Davies’ shows The Back of My Mum’s Head and Firing Cheeseballs at a Dog. He has also supported Russell Kane and Chris Addison.

Gamble’s other TV appearances include Dave’s One Night Stand (UKTV), Virtually Famous (E4) and Sweat the Small Stuff (BBC Three) and he has written for Never Mind The Buzzcocks (BBC2), Mock The Week (BBC2) and Ask Rhod Gilbert (BBC1) as well as writing for Man Down (Channel 4).

With two guest spots under his belt, Gamble is the only act to make a return appearance on Russell Howard’s Good News, having performed both solo and alongside former comedy partner Ray Peacock.

Gamble’s partnership with Peacock saw them co-write and host the iTunes chart-topping and Chortle Award nominated Peacock and Gamble Podcast. The pair also presented programmes for BBC Radio 4 Extra’s The Comedy Club and starred in Warm Up for BBC Comedy Online.

Gamble made his debut at the Edinburgh Fringe in 2014 with his first solo show Gambletron 5000, and returned in 2015 with his acclaimed follow-up Lawman.

Support on the night comes from Durham stand-up David Callaghan who took his debut solo show No Momentum to the Edinburgh Fringe last year, having previously shared a bill with fellow stand-up Amy Gledhill in 2014.

Callaghan also took part in the BBC New Comedy Awards in 2012 and 2013, and recently supported Edinburgh Comedy Award winner Sofie Hagen, who appeared at The Bottle Shop in May. His sharp, expressive and charming comedy has seen him compared to the likes of Daniel Kitson, with Chortle dubbing him “undeniably charismatic and witty”.

The venue’s comedy night, which takes place on the first Wednesday of every month, launched in February, and since then has welcomed the likes of Jo Caulfield, Patrick Monahan, and BBC New Comedy Award winner Steve Bujega.

Bottle Shop general manager Mike Morley said: “We’re delighted to welcome such a high calibre comic in Ed Gamble, and are especially pleased to tempt him up to the North East for a rare Newcastle appearance. We expect tickets to move fast for this one, so don’t hang about!

“We’ve had some amazing shows in the past few months and we’re looking forward to continuing that level of quality with Ed’s new show.”

Opened in October 2015, The Bottle Shop Bar + Kitchen is a craft beer bar and eatery located in the heart of Newcastle city centre. The Bottle Shop serve a vast, hand-picked and constantly changing selection of the very best craft beers from around the world, alongside a healthy stock of wines and spirits.

The Bottle Shop also host regular events from comedy shows and live music to beer-tasting evenings and gaming nights. A full list of upcoming events can be found at: bottleshopbar.co.uk

WHERE & WHEN
The Bottle Shop Bar and Kitchen, Waterloo Square, Newcastle, NE1 4DN.
Wednesday 1 June – The show starts at 7.30pm, with doors open from 6pm.

TICKETS
Tickets are £5 (or £15 including admission and a ribs, wings, fries and ‘slaw platter worth £15) and are available now from: seetickets.com.