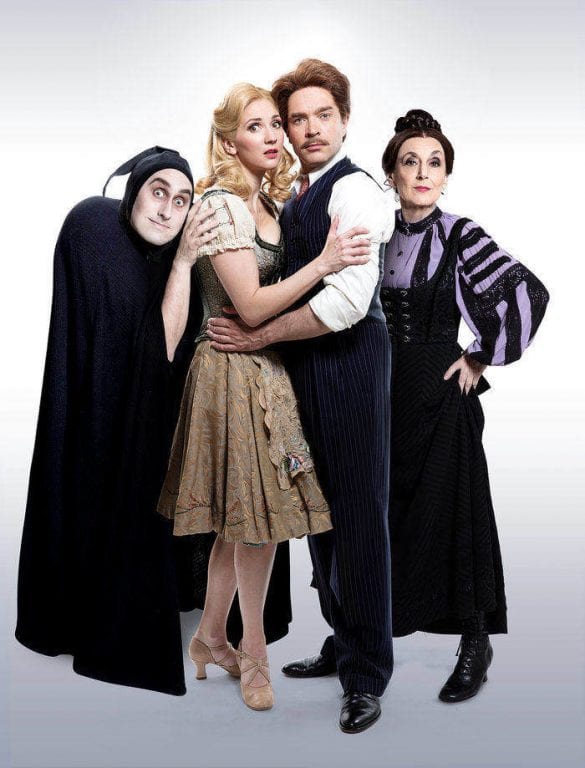 North East folk will be able to see the monster musical comedy and its all-star cast first before anyone else for two weeks only: Sat 26 Aug – Sat 9 Sep 2017.  Do not miss!

Local lad and comedy hero Ross Noble and screen stars Lesley Joseph and Hadley Fraser will lead the cast of the brand new all-singing all-dancing extravaganza, which is based on the Oscar-nominated smash hit movie of the same name.  The show will run for two weeks in Newcastle as a ‘pre-West End’ season before it opens at London’s Garrick Theatre in late September.

Summer Strallen also stars in the show.  Sister of Zizzi (Mary Poppins) and niece of Bonnie Langford, audiences will likewise recognize her from Live Theatre’s Flying into Daylight and Paradise Moscow at the Theatre Royal in 2009. Dianne Pilkington (Wicked), and Patrick Clancy (The Producers, Joseph and the Amazing Technicolor Dreamcoat) will also feature.

Hadley Fraser will play the title role of Dr Frederick Frankenstein, grandson of the infamous Dr. Victor Frankenstein, and immortalised by Gene Wilder in the 1974 movie. Hadley’s widely acclaimed stage credits include Marius in the West End production of Les Miserables, a show to which he returned in the role of Javert. He was in the Kenneth Branagh Theatre Company for The Winter’s Tale & Harlequinade at the Garrick Theatre and starred alongside Tom Hiddleston in the Donmar Warehouse production of Coriolanus, and performed there again in City of Angels, The Vote and Saint Joan.

Cramlington lad Ross Noble will play the hilarious role of the hunchbacked, bug-eyed servant Igor. Ross is one of the UK’s most original and exciting performers: a stand-up comedian since the age of 15, his countless accolades include Time Out award winner for best live stand-up, Barry Award winner, Perrier Award nominee and several Chortle Awards. Unveiling a new sell-out show every year for the last 20 years, Ross is one of the most successful comedians of our time exuding an on-stage presence unlike any other.

Ross’ worldwide travel as a stand-up was the subject of his own BBC Radio 4 programmes, Ross Noble Goes Global and Ross Noble On. He is a regular guest star on TV programmes including Live at the Apollo, QI, Just A Minute and I’m Sorry I Haven’t A Clue, and he has made 19 appearances on Have I Got News for You.

Lesley Joseph is Frau Blucher, the forbidding housekeeper to the Frankenstein family estate in Transylvania. Lesley is best known for playing Dorien Green, the neighbour from hell, in the ITV1 sitcom Birds of a Feather. Having recorded over one hundred episodes, Dorien became a national institution, with the show watched at its height by 23 million people. Lesley has a wealth of theatrical experience to her credit; most recently in the 2016 UK tour of Annie, in which she played the role of Miss Hannigan. In 2016, Lesley donned her dancing shoes and sequinned dresses as one of the contestants in Strictly Come Dancing with dance partner Anton du Beke.

Young Frankenstein, the wickedly inspired re-imagining of the Mary Shelley classic, sees Frederick Frankenstein, an esteemed New York brain surgeon and professor, inherit a castle and laboratory in Transylvania from his deranged genius grandfather, Victor Von Frankenstein.  He now faces a dilemma – does he continue to run from his family’s tortured past or does he stay in Transylvania to carry on his grandfather’s mad experiments reanimating the dead and, in the process, fall in love with his sexy lab assistant Inga?

Based on the hilarious 1974 film and co-written with Thomas Meehan, Brooks will once again collaborate with Broadway director and choreographer Susan Stroman for this all-singing all-dancing new production, bringing his and Gene Wilder’s classic movie to life on stage.

Read More »
December 15, 2021
PrevHave you read?Newcastle Based Restaurant Chain Set To Branch Out To Beamish
Next read...David Baddiel Returns To Newcastle With Hit One-Man ShowNext