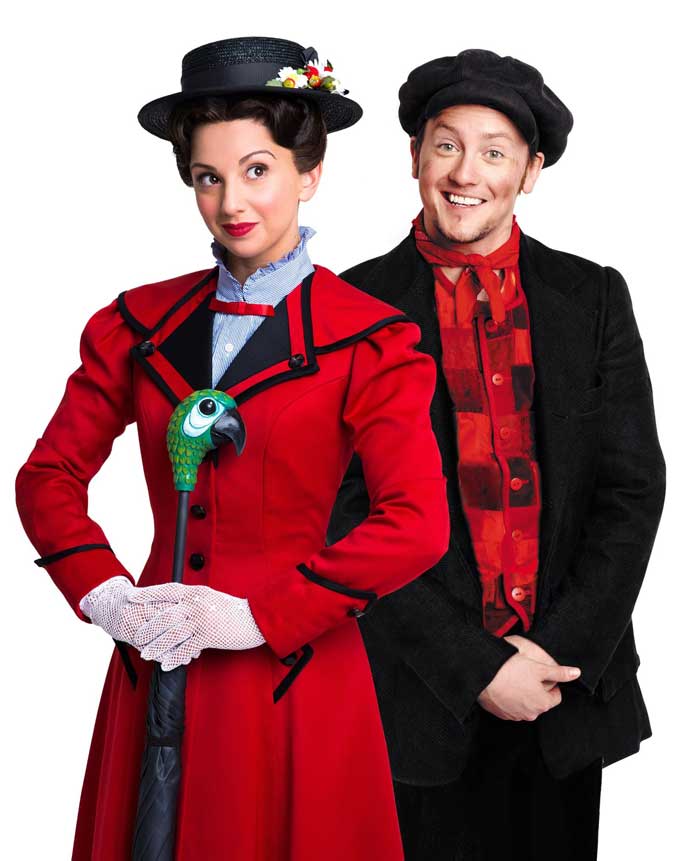 Disney and Cameron Mackintosh are delighted to announce that Zizi Strallen will play ‘Mary Poppins’ and Matt Lee will play ‘Bert’ in the forthcoming UK and Ireland tour of their multi award-winning musical Mary Poppins, playing at Newcastle Theatre Royal from 8 September 2016 for over seven weeks .

Zizi Strallen is currently starring as ‘Lana’ in Matthew Bourne’s The Car Man, a role she played at Newcastle Theatre Royal last month to rave reviews. She was most recently seen in the West End in Cats and the multi award-winning Merrily We Roll Along. Her other West End credits include Rock of Ages, Dirty Dancing and Chitty Chitty Bang Bang and Matthew Bourne’s Cinderella at Sadler’s Wells. She has also appeared in The Music Man at Chichester Festival Theatre, and as ‘Penny Pingleton’ in Hairspray at Leicester Curve.

Matt Lee played the role of ‘Bert’ in Mary Poppins when the show opened in Australia, his portrayal winning him the prestigious Helpmann Award for Best Actor in a Musical. His other theatre credits in Australia include Miss Saigon, The Witches of Eastwick, Rent, Grease and The Boy from Oz. Matt was also a permanent member of the judging panel for Australia’s So You Think You Can Dance.

Cameron Mackintosh said today: “It’s hard to believe that it is already 11 years since Mary Poppins first landed on the London stage. My goodness……time flies even faster than our beloved Nanny! I’m delighted to be bringing her back to the UK and for the first time to Dublin, after spreading her magic around the world. Since we originally staged the production we have found even more magical ways to stage this timeless tale. I’m also thrilled to have cast yet another of the extraordinarily talented Strallen family in the role of Mary and pair her with one of the most brilliant Berts we have been fortunate to find worldwide. I know Zizi and Matt will be practically perfect in every way and a show-stopping tour de force”.

The magical story of the world’s favourite Nanny arriving on Cherry Tree Lane has been triumphantly and spectacularly brought to the stage with dazzling choreography, incredible effects and unforgettable songs. The stage version of Mary Poppins is brilliantly adapted from the wonderful stories by PL Travers and the beloved Walt Disney film.

The stage production of Mary Poppins is co-created by Cameron Mackintosh and has a book by Oscar-winning screenwriter and Downton Abbey creator, Julian Fellowes. It has a timeless score by Richard M Sherman and Robert B Sherman including the songs Jolly Holiday, Step in Time, Supercalifragilisticexpialidocious and Feed the Birds with new songs and additional music and lyrics by the Olivier award-winning British team of George Stiles and Anthony Drewe. The producer for Disney Theatrical Productions is Thomas Schumacher.

The internationally renowned and multi award-winning creative team assembled for Mary Poppins is led by stage and film director Richard Eyre. Co-direction and Choreography is by Matthew Bourne, with Co-choreography by Stephen Mear. Set and Costume Design is by Bob Crowley with Lighting Design by Natasha Katz, Sound Design by Paul Groothuis and Orchestrations by William David Brohn. The International Tour of Mary Poppins is Directed by Anthony Lyn and James Powell with Original Choreography adapted by Geoffrey Garratt. Musical Supervision is by Stephen Brooker.

TICKETS
Tickets from £22.50 (pay 50p less per ticket when you book online). Tickets can be purchased from the Theatre Royal Box Office on 08448 11 21 21 (Calls cost 7p per minute plus your phone company’s access charge) or select your own seat and book online at: www.theatreroyal.co.uk