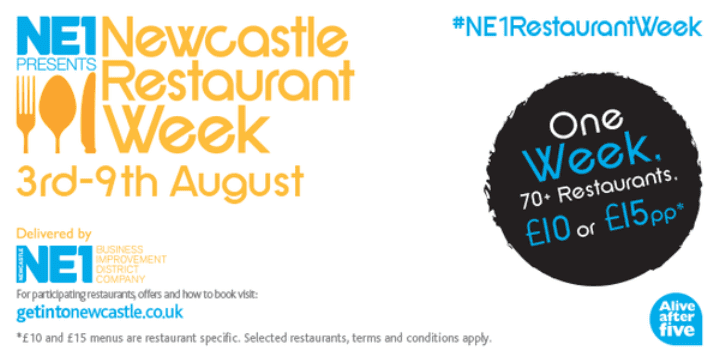 Get on the phone and make a reservation at one of the 70 plus restaurants taking part in this August’s NE1’s Newcastle Restaurant Week from 3 – 9 August. The event is back and there’s a number of new restaurants with an international flavour involved in the line up, all offering diners the chance to experience some of Newcastle’s finest restaurants for only £10 or £15 per head.

The Painted Elephant, tucked away in the city centre courtyard of Princess Square is the first vegan restaurant to join the NE1’s Newcastle Restaurant Week throng. An unlicensed venue, the restaurant is a ‘bring your own’and specialises in local seasonal produce.

Other new venues involved for the first time are a number of Asian restaurants including Little Asia, Thai Siam, Mantra Thai and Saigon Café. Diners can now satisfy their appetite with meals from around the world with Chinese, Thai and a whole host of European offerings involved in the latest event.

NE1’s Newcastle Restaurant Week has a truly international flavour with the city’s first and only Peruvian restaurant, Solanos joining the ever-popular event. Named after former Newcastle United superstar, Nolberto Solano, the restaurant, which has been open for two months, serves traditional Peruvian fare.

With over 70 restaurants to choose from diners can try to ‘eat around the world’ through the week. Restaurants get extremely busy during NE1’s Newcastle Restaurant Week so people are encouraged to book early to avoid disappointment.

As well as all the new restaurants taking part, NE1 is delighted to welcome back some of Newcastle’s premium venues that have taken part in all nine previous NE1’s Newcastle Restaurant Weeks including the Café 21 Hospitality Group with Café 21, Broad Chare and Café Vivo and Blackfriars Restaurant.

NE1’s Newcastle Restaurant Week has been phenomenally successful since its launch in 2011 when NE1 got together with some of the city’s top restaurants to discuss what could be done to support the industry at traditionally quiet times of the year. Modelled on a similar scheme that operates in New York City, NE1 decided to launch NE1’s Newcastle Restaurant Week. All the city’s top restaurateurs saw the potential and were prepared to put aside their competitive rivalries to work together for the good of the industry.

13 of Newcastle’s top restaurants were involved in the first event, now 4 years later, over 70 restaurants take part and the weeks, one in January, the other in August, are a firm fixture in the city’s events calendar with over 60% of NE1’s Newcastle Restaurant Week customers visiting 2 or more restaurants during the week with some dining out 7 nights during the week.

NE1’s Newcastle Restaurant Week is a unique formula, nowhere else in the UK operates an event like it, which is so simple and easy to communicate to consumers as well as being easily adopted by restaurants.

You have been worrying about it all day long. Finally, another night passes and you are still facing the same problem… you suffer from impotence

If you suffer from erectile dysfunction and are looking for quality drugs , then the Swedish online pharmacy provide proven products by type: Generic Cialis,