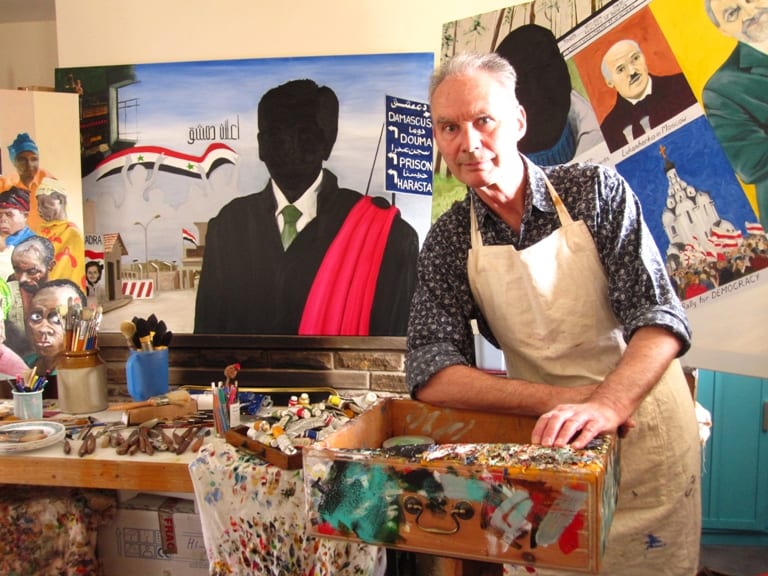 An exhibition of oil paintings by Newcastle-based artist Paul Piercy is to cast light on some of the world’s most dedicated human rights campaigners.

The Black Portraits opens at Discovery Museum on Saturday 16 January, telling the stories of 17 people from around the world who were imprisoned – or died – in pursuit of justice and liberty. Six paintings are to be shown for the first time.

Piercy’s subjects are the extraordinary people who not only dreamed of the freedoms and equalities we take for granted in the UK, but strove towards them peacefully.

Their faces are painted in thick, black impasto, an aesthetic that took on a profound symbolic meaning for the artist. He explains:

“In 2010, I saw that Liu Xiaobo had been awarded the Nobel Peace Prize. His story moved me and I wanted to tell everyone I could about it through my painting. I quickly put a colourful backdrop together but with my ‘sitter’ absent, I decided to use thick black paint for his face, so that it would catch the light and show his features.

“I discovered many, many other brave human rights activists in different parts of the world and became moved to tell their stories too. It became apparent that seeing them all with faces in black impasto made a powerful statement about their death or imprisonment, so that’s how I continued.”

The most prominent global figure in the exhibition is Myanmar’s Aung San Suu Kyi, who won the Nobel Peace Prize in 1991. She spent 15 years under house arrest by order of the country’s military junta before her release in 2010. Aung San Suu Kyi is now President of the National League for Democracy.

Some of those depicted, like Oleg Bebenin, paid the ultimate price for their activism. A campaigner for Belarusian presidential hopeful Andrei Sannikov, Bebenin was found hanged in suspicious circumstances in 2010. Sannikov – himself a political prisoner – also features in Bebenin’s portrait and will host a free talk and film screening at Discovery Museum on Saturday 9 April.

Another, Ali Abdulemam, became known as the ‘Bahraini Blogger’ after founding a pro-democracy website in the late 90s. Accused of trying to subvert the country’s regime, he went into hiding for two years before emerging in 2013. He has now been granted political asylum in the United Kingdom and visits Discovery Museum to give a free talk about his story on Saturday 26 March.

Alongside The Black Portraits are five paintings which show full-colour likenesses of their subjects. The additional depictions of Binayak Sen, Lapiro de Mbanga, Ali Abdulemam, Andrei Sannikov and Guillermo Farinas were created after their respective releases from prison.

The exhibition runs from Saturday 16 January until Sunday 17 April and is supported by a programme of public events, including talks and film screenings.

Read More »
December 15, 2021
PrevHave you read?24 Hours in Newcastle
Next read...Frankie Lee Returns To The UK This JanuaryNext