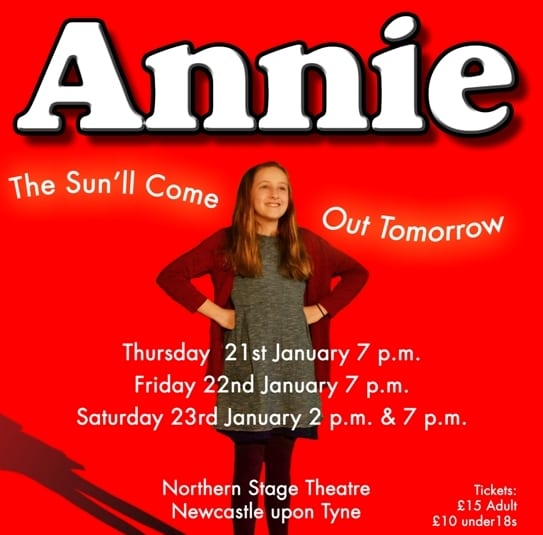 Newcastle High School For Girls has not heeded the age-old theatrical adage of never working with children and animals and is doing both in its latest stage production of Annie being performed at Northern Stage from Thursday 21 – Saturday 23 January.

85 girls aged between 11 and 18 years old will take to the stage along with a dog, called Maud who will take the part of Annie’s beloved pooch, Sandie.

11 year old, Eleanor Bretwell from South Shields, is the youngest cast member and takes the lead as Annie, her first ever drama role at Newcastle High. Eleanor joined the school in Year 7 in September and since her arrival has been rehearsing along with her co-stars at weekends and in the holidays to ensure that they are stage-ready for the show’s four performances starting this Thursday.

The stage show will be accompanied by an 18-piece orchestra from Newcastle University with several pupils from Newcastle High among their ranks, conducted and musically directed by the school’s Director of Music, Mr David Newey.

Newcastle High has enlisted the services of professional set designers for the production with the girls providing their own costumes and one of the Sixth Form girls supplying all the props.

Maud, aka Sandie the dog, is a six year old Zuchon, a mix of Shih Tzu and a Bichon Frise, belonging to one of the teachers at Newcastle High. Maud is likely to steal the show (although not necessarily for her acting talents) and has caused more work for the production team than getting 85 children onto the stage.

Newcastle High has had to go to great lengths to get the necessary permissions for the dog to be allowed to perform in the show. Special council visits to Maud’s home have been conducted, separate insurance cover has been organised and Maud not only has her own dressing room, but a special recce of the theatre was conducted before a performing licence could be granted for her to appear in the show.

For the part, Maud has put on weight and has grown her fur to make her look more like Annie’s dog, Sandie. The only slight issue is the discrepancy in colour, Sandie is sandy coloured and Maud is white – a detail that is expected to add to the comedy of the show, that and the fact that Maud is indeed not a very good actor and refuses to do much, if anything while on stage. The girls from Newcastle High more than make up for Maud’s lack of acting talent with their exceptional acting, dancing and singing in a performance that is expected to attract some of the biggest audiences for a Newcastle High stage show ever.

Newcastle High has invited over a hundred children from three of its partner primary schools, Richardson Dees, West Denton and Welbeck Academy, to watch the dress rehearsal on the afternoon of Thursday 21 January at 2pm before the show officially opens the same evening at 7pm.

Commenting on this year’s show, Anna Dobson, Drama teacher at Newcastle High explained: “Newcastle High stages a large theatrical production each year, Annie has been the most challenging to date but also the most satisfying not least because of the lengths we’ve had to go to for Maud. The girls have had to learn many new songs from scratch and in a very short space of time, but one of the great things is that there are 20 speaking roles, an unusually high number for a musical production. Eleanor and Maud are a winning combination and we expect them to bring the house down.”

TICKETS
A 15% group discount is available for party bookings over 10 tickets and family tickets of £45 are also available.To book call the Northern Stage Box Office on 0191 2305151 or online at https://www.northernstage.co.uk/whats-on/newcastle-high-school-for-girls-annie