Newcastle Then And Now In Pictures

Photos which illustrate how dramatically Newcastle has changed... 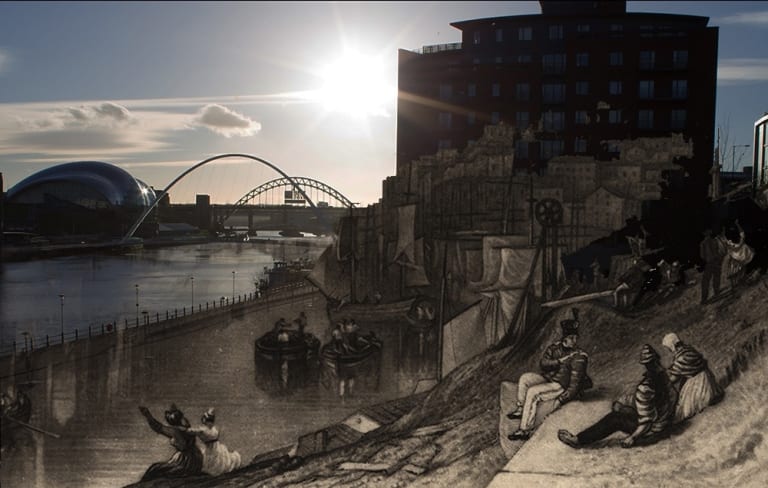 We can tell what Newcastle used to be like by looking at old photos and illustrations. But Andrew Farris has gone a step further by travelling the world taking photographs and juxtaposing them with old photos and pictures taken from the same spot.

He was in Newcastle last year and took some photos which illustrate how dramatically the city has changed – not always for the better – and, occasionally, hardly changed at all. We think you’ll agree the results are fascinating.

A ship passes through the Swing Bridge. The bridge replaced a smaller 18th Century bridge on the same spot and was meant to allow vessels to go upstream to Armstrong’s Elswick armaments works. Armstrong designed and paid for the bridge, using the same engineering technologies that revolved turrets on battleships. The bridge is still in working order today, though ships rarely pass through it.

A peddlar speaks with a woman. The caption speculates that the man is Francesco Viviana, or Old Man Friday, apparently a fixture of Newcastle around the turn of the last century. In the background is the Grey Monument, built to commemorate Prime Minister Charles Grey, champion of the Great Reform Act of 1832 that redistributed electoral power from the countryside to Britain’s rapidly growing industrial cities.

Carts and pedestrians on the Side.

People pile on to a horse bus about to cross the High Level Bridge. This bus cost a halfpenny until the horse buses were phased out in favour of trams in 1923.

The HMS Monarch passing the Tyne Bridges on its way to Elswick arsenal just upriver from Newcastle. Lord Armstrong is generally recognized as the inventor of modern artillery and his massive arsenal armed thousands of ships.

A busy Sunday morning on the Newcastle Quayside Market. Evidently the spot was both a place of social gatherings as well as a port.

Firemen appear to have just put out a small fire on Clayton Street and are now picking their hoses from the soaked pavement. A crowd of curious onlookers have gathered. Of curiousity to us is the radically different design of fire engine used at the time.

What has changed for the better and what hasn’t? Let us know what you think.

For more pictures of Newcastle, visit his interactive blog, hover over the pictures and activate the fade in and fade out effect with dramatic results!

Then photos are courtesy of the Newcastle Libraries and Newcastle Museums

Read More »
December 15, 2021
PrevHave you read?6 Grooming Rituals Every Man Should Follow
Next read...Robots Are Brought To LifeNext