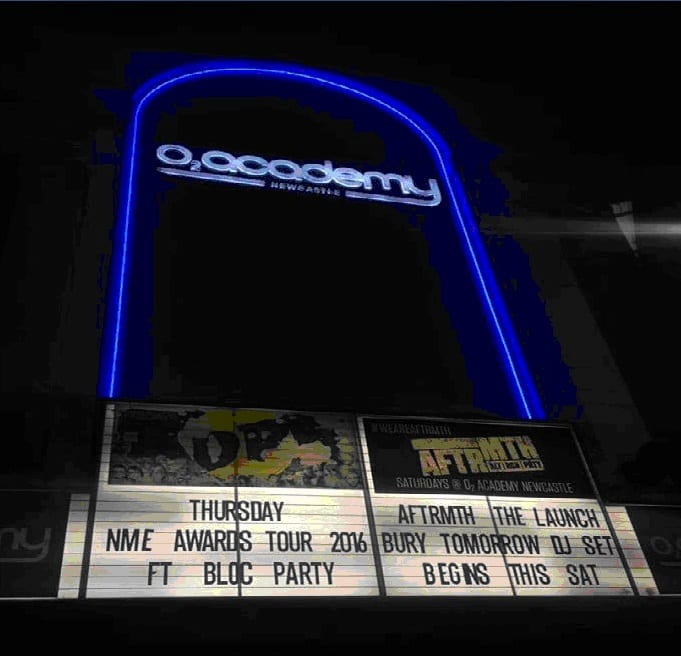 Each year, the NME Awards Tour selects a handful of established and upcoming artists to blow away the winter blues at venues across the country. This year, with a mini-festival line-up consisting of Bloc Party, Drenge, Rat Boy and Bugzy Malone and 11 locations featured in their schedule, Newcastle was lucky enough to be one of them.

Warming up the Geordie audience was Bugzy Malone, a grime MC hailing from Manchester, England. He has often been described as one of the key players instigating a “grime revival” moving the UK scene away from more commercially orientated music. Making shockwaves in the grime scene in the past year, Bugzy has certainly stuck to his guns on his most recent EP, Walk With Me, keeping that raw Manchester sound in his songs, and it’s one thing that sets him apart from other artists, as well as his consistently solid lyrics, backed up by excellent beats that compliment his flow perfectly.

The guy deserves some respect to be in with the likes of Drenge and Bloc Party, and his clear, crisp sound feels like it was intelligently planned to keep the mixture of Bugzy’s often deep and emotional bars separate from the harder grime tracks such as ‘Watch Your Mouth’ and ‘Get Gassed’, which went down a treat as the audience filed through the doors.

Once Bugzy was finished spitting one line flows and promoting the increasingly popular grime sound, Jordan Cardy, stage name, Rat Boy, modestly walked out on stage. At just 19 years of age but already finding himself in not only this line-up but playing Leeds and Reading festivals this summer, he already has some impressive accolades under his name in his teenage years.. Cardy mostly sounds a lot like early Jamie T: the same yelped rapping over the same scruffy ska-punk, the same say-what-you-see social commentary wrapped in tales of hapless teenage scrapes.

It’s clear to see this appeal going down well with the younger audience nearer the front of the venue, inspiring them to energetically “mosh” like a school disco selling only high-in-sugar Panda Pops. The hotly tipped 19-year-old answers a specific need for the British music industry. From Madness to the Streets, there’s always been a demand for home-grown cheeky chappies who can convert stubborn suburban teens into paying customers however, and he does this to perfection.

Drenge are a grunge/rock duo from Derby who make thrashing, short and snappy, not so radio-friendly songs with rather angry titles – Face Like A Skull and People In Love Make Me Feel Yuck, to name just two. They wasted no time delaying their arrival after Rat Boy and crashed onto the scene with “Never Awake”, a song from their latest critically acclaimed album, Undertow. In no time they invigorated the crowd with smashing drum solos and truly pushing the microphone to its limits with impressive Yorkshire tinted vocals. As expected, songs from both albums vibrated the walls of the o2, and in no time aggressive mosh pits mirrored the raunchy rock sound that bellowed from the speakers on stage.

They soon made way for the main act of the evening. Bloc Party were welcomed to the stage with roaring cheers and audience attire, whose owner’s excitement clearly overflowed. Gliding garments aside, Kele and his band opened up their setlist with the mellow track “The Good News”, with guitar riffs that wouldn’t be out of place in a wildwest shootout thriller, playing under crimson strobe lights.

With their latest album Hymns only released less than a week ago; hardcore fans were thrilled to hear it was going to be featured in their setlist tonight. Things took a turn for the romantic when lights turned purple, pink and blue when singer Kele, wiping perspiration from his brow, dedicated the Spanish The Love Within to the couples in the audience, with the songs slow careful melodic build up before turning turbulent with pincer like electro synths constantly surrounding the vocals – mirroring relationships perhaps?

The foursome soon put down their instruments and seemingly disappeared off a now pitch black stage instantly warranting encore calls from the fans. After screams of wanting more eclectic beats the stage was soon lit ablaze with neon lights – a factor of their show that deserves some recognition for being a spectacle all evening – with Kele taking a seat to deliver a tranquil sound in So Real, bringing the audience back down to earth, almost as if he was chatting to the audience through song.

“Kele and his band opened up their setlist with the mellow track “The Good News”, with guitar riffs that wouldn’t be out of place in a wildwest shootout thriller…”

Helicopter proved its popularity as the song received the biggest reaction soon after, with lad’s sacrificing themselves to hoist eager partners up on shoulders and getting right amongst the atmosphere in the acoustically crafted room at the O2 Academy. The first few opening lines were sung by the audience as Kele smiled having seen his work shouted enthusiastically shouted back at him.

With what seemed to be their biggest song now played, and three songs gifted to loyal listeners, surely this signalled the end of the night. But Bloc Party weren’t done just yet, smashing it one last time with Ratchet, the fast-paced forgotten gem off album Four, making the crows move and sing more than ever, all giving it more last final effort.

After more than a decade in the music business, they still look like they’re loving it, and this makes a big difference to the atmosphere in the room – by the end the whole Academy was in song. Their lyrics will be sung long into the night from content crowds as they file through the brightly lit streets of Newcastle, sore throats will not come as a surprise in the morning!