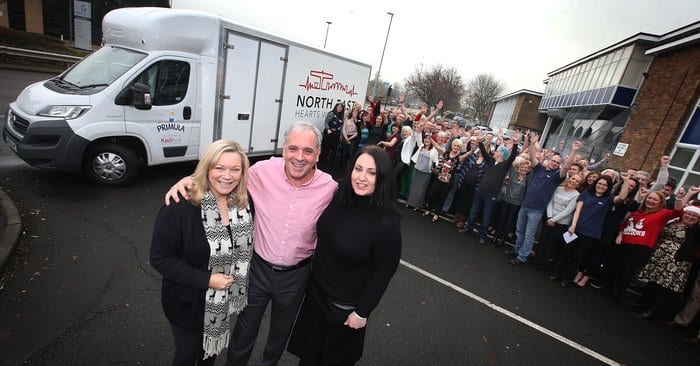 Christine Stephenson and Kelly Best, founders of North East Hearts with Goals, were presented with a brand-new van, kitted out with state-of-the-art defibrillator equipment and worth £60,000.

Thinking that they were there to pitch their charity message to Primula staff, the pair were ushered outside where they were presented with the van by Paul Lewney, Managing Director of Kavli UK which owns Primula Cheese.

As well as being fitted with defibrillators, the van contains screening equipment which will allow the charity to help spot the signs of heart disease and potentially save the lives of people from the region.

Following a routine screening in 2013, Kelly’s 18-year-old son Will was diagnosed with arrhythmogenic right ventricular cardiomyopathy (ARVC), a rare disease of the heart muscle. Kelly and Christine now hope that screening more people will reduce the amount of deaths from heart related conditions.

Through tears, Christine Stephenson said: “This is such a huge surprise, having a van like this has bene our dream but we would have had to fundraise for a really long time to be able to afford this, it is amazing.

“We thought that we were coming to Primula to pitch the charity to the staff so they could learn a little bit about what we do and how a screening van or placing defibrillators can help people in the North East, we never expected this.

“Defibrillators save lives following a cardiac arrest, but it always better to know that there is a problem there before it happens which is hopefully what this new van is going to do. It really is going to help families and communities across the North East. We can’t thank Primula enough for this donation.”

Heel and Toe Children’s Charity also received a surprise donation of £25,000 to fund a hydrotherapy pool at their new centre in County Durham. The state-of-the-art pool will help over 120 children from all across the North East who are living with disabilities or who are recovering from operations which require physiotherapy.

Jane Long from Heel and Toe Children’s Charity said: “I was so shocked by the donation today. Our new building in Chester-le-Street will be ready around August next year and the new hydrotherapy pool is going to be huge part of this. We are unique to the region in the services we provide so this donation really is going to change lives. Thank you to everyone at Primula.” 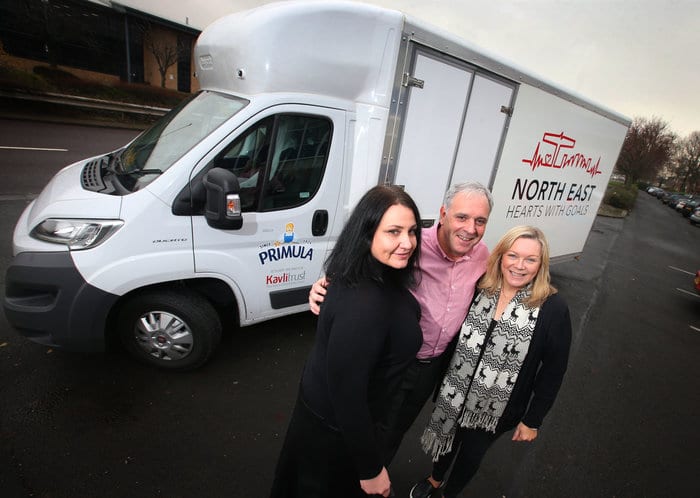 The money for both donations came from The Kavli Trust, the charitable trust which owns Primula Cheese and which donates profits from sales of Primula and other Kavli products to good causes throughout the UK and abroad, supporting research, humanitarian and cultural projects which improve people’s lives.

James Annan is joint chair of Kavli in the Community, the group of Primula staff who help decided which local charities will benefit each year from the money allocated from The Kavli Trust.

He said: “It was really hard to keep these donations a secret – it was unbelievable to see Christine and Kelly walking out and seeing the van for the first time. I have been involved with the plan and the charity nomination right from the very beginning so seeing their reaction was absolutely amazing.”

Kavli UK managing director Paul Lewney said: “Charity is at the heart of everything that Primula does and being able to deliver such an incredible Christmas surprise really makes all of the hard work worth it. We chose these charities because they will make a real difference to people living in the North East and we hope that the gifts help them to continue delivering their invaluable work.”

Staff from Primula’s North East office were asked to nominate local charities as beneficiaries of this year’s donations, with North East Hearts with Goals and Heel and Toe Children’s charity chosen.

Meanwhile, the Alzheimer’s society were presented with a cheque for more than £15,000 which was raised by staff from Primula Cheese at the first annual Cheesy Ball in October this year. The event took place at the Newcastle Gateshead Marriott Hotel MetroCentre and was held in memory of former Primula warehouse manager Dean Elliott, who was a big supporter of the Alzheimer’s society and sadly passed away last year.