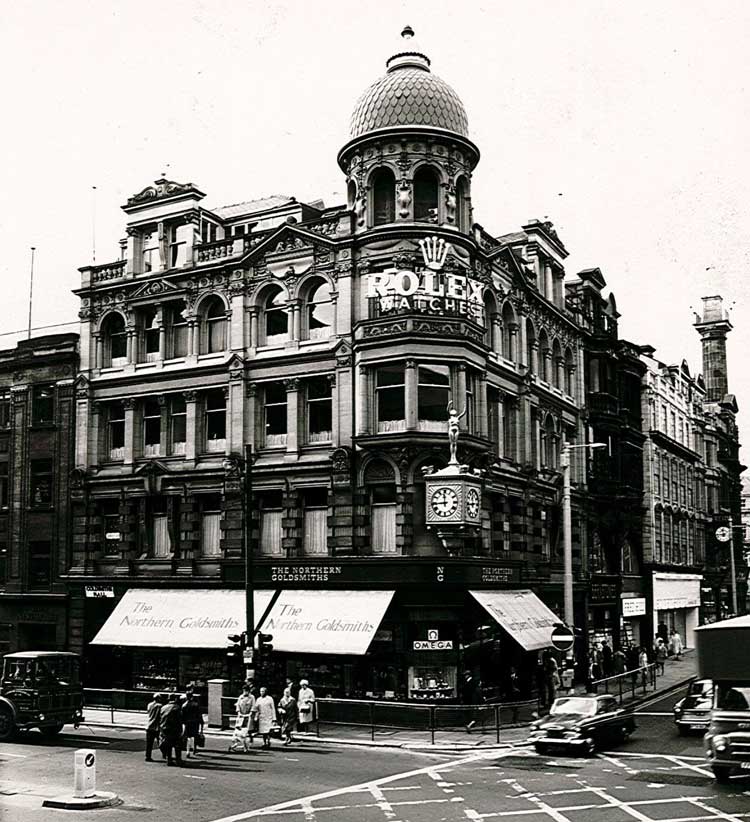 HISTORIC Newcastle jewellers Northern Goldsmiths are calling for people in the North East to come forward with their timepieces from years gone by to collate a 3D archive.

The city centre showroom which has occupied the corner of Pilgrim Street and Blackett Street, in Newcastle since 1892 is one of the most long-standing in the Goldsmiths estate. It was also once the company’s central head office.

While it has an extensive back catalogue of imagery and newspaper clippings throughout its 123-year legacy, the team is on the search for memorabilia, to either borrow or buy to form a product showcase, which will be displayed upon the store’s reopening in July 2015.

Craig Bolton, executive brand director for Goldsmiths said: “Northern Goldsmiths has long held a place in the region’s hearts – part of family history for many and a go-to destination for those special occasions. We would like to create a visual representation of Northern Goldsmiths which can be enjoyed in the store for years to come and are encouraging members of the public to come forward with their memorabilia.”

Northern Goldsmiths is an iconic Newcastle landmark known for being lit up at night – historically making it somewhere for revellers to meet. The Rolex clock on the corner of the building remains a popular meeting place and has been the scene of many proposals over the years, consequently known locally as ‘the kissing clock’.

Craig continued: “We know that the ‘kissing clock’ achieved its name due to its popularity as a proposal spot in the city. Often the ring came right out of the window so we’d love to hear from those who may have been part of this lovers’ tale.

“We’re also on the lookout for anyone who has an ‘original Northern Goldsmiths’ watch which used to be manufactured in the workshop above the showroom in Newcastle. We only have a visual of one at the moment but it would be a triumph to source an actual piece.”

The store is currently closed while it undergoes a £1m transformation, restoring its iconic listed features and will reopen in early July 2015.

Goldsmiths is the UK’s largest luxury high street retailer with over 110 stores nationwide and online at goldsmiths.co.uk, and was the first official Rolex retailer in the country.

With over 230 years of experience and tradition, Goldsmiths sells fine jewellery and diamonds, including exclusive brands Vera Wang Love and Canadian Ice and operates the largest distribution network for Rolex, Omega and TAG Heuer as well as many other reputable watch brands such as Michael Kors.

Anyone interested in putting forward their items of nostalgia should email NorthernGoldsmiths@opr.co.uk with a photo and brief description of the item.