The National Theatre’s multi award-winning production of The Curious Incident of the Dog in the Night-Time is set to return to Newcastle Theatre Royal due to popular demand, following a sell-out visit in 2015.   Be mesmerised once again Tue 30 May – Sat 10 June 2017.

Simon Stephens’ adaptation of Mark Haddon’s best-selling novel, The Curious Incident of the Dog in the Night-Time received seven Olivier Awards in 2013 including Best New Play, Best Director, Best Lighting Design and Best Sound Design.  The show’s first phenomenally successful tour was seen by almost 400,000 people nationwide, continues to play to packed houses in the West End and is currently being rolled out to US shores.

The show tells the story of Christopher Boone, who is fifteen years old.  He stands beside Mrs Shears’ dead dog, which has been speared with a garden fork, it is seven minutes after midnight and Christopher is under suspicion. He records each fact in a book he is writing to solve the mystery of who murdered Wellington.  He has an extraordinary brain, and is exceptional at maths while ill-equipped to interpret everyday life.  He has never ventured alone beyond the end of his road, he detests being touched and distrusts strangers.  But his detective work, forbidden by his father, takes him on a frightening journey that upturns his world.

National Theatre producer Kash Bennett said: ‘We were overwhelmed by the enthusiastic  reception from audiences around the UK and Ireland when we toured The Curious Incident of the Dog in the Night-Time in 2014-15, and are delighted to be taking this beautiful and inventive show to new venues and making return visits to others.’

The production is directed by Marianne Elliott, an Associate Director of the National Theatre where her productions have included: Husbands and Sons, the record-breaking War Horse (co-directed with Tom Morris), The Light Princess, Port, Season’s Greetings, All’s Well that Ends Well, Harper Regan, Saint Joan(Olivier Award for Best Revival, South Bank Show Award for Theatre), and Pillars of the Community (Evening Standard Award for Best Director).  Marianne was consultant director on The Elephantom for the National Theatre and also directed Sweet Bird of Youth for the Old Vic with Kim Cattrall.   Marianne’s next show for the National Theatre is Angels in America which began rehearsals in January. 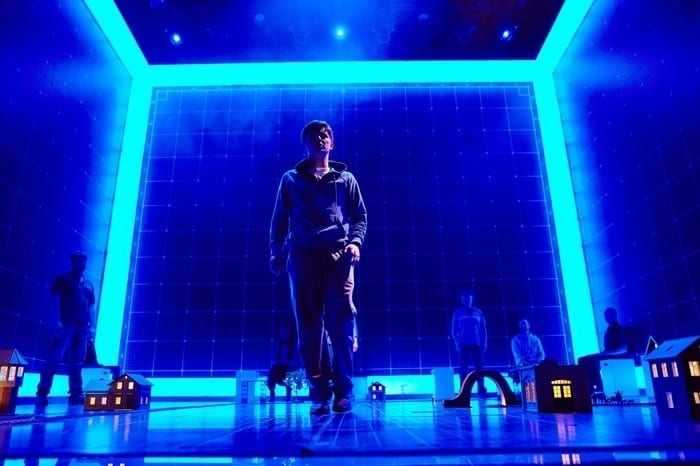 Mark Haddon is an author, illustrator and screenwriter who has written fifteen books for children and won two BAFTAs. His bestselling novel, The Curious Incident of the Dog in the Night-time, was published simultaneously by Jonathan Cape and David Fickling in 2003. It won seventeen literary prizes, including the Whitbread Award. His poetry collection, The Talking Horse and the Sad Girl and the Village Under the Sea, was published by Picador in 2005, and his last novel, The Red House, was published by Jonathan Cape in 2012. His latest book is The Pier Falls, a collection of stories. He lives in Oxford.

Simon Stephens’ new translation of The Threepenny Opera, directed by Rufus Norris with Rory Kinnear as Macheath opened at the NT’s Olivier Theatre in 2016.  His other plays for the National Theatre include:  Port at the National Theatre’s Lyttelton Theatre , Harper Regan and On the Shore of the Wide World (co-production with Royal Exchange, Manchester: Olivier Award for Best New Play).  His many other plays include Carmen Disruption, Heisenberg,  Birdland, Blindsided, Three Kingdoms, Wastwater, Punk Rock, Seawall, Pornography, Country Music, Christmas and Herons; A Thousand Stars Explode in the Sky (co-written with Robert Holman and David Eldridge); an adaptation of Jon Fosse’s I Am the Wind and Motortown.  His version of A Doll’s House for the Young Vic transferred to the West End and then New York in 2014. Simon is an Associate at the Lyric, Hammersmith and the Royal Court Theatre.

Read More »
December 15, 2021
PrevHave you read?What’s On This Easter At The Botanist
Next read...Maximo Park To Play Intimate HMV Newcastle GigNext