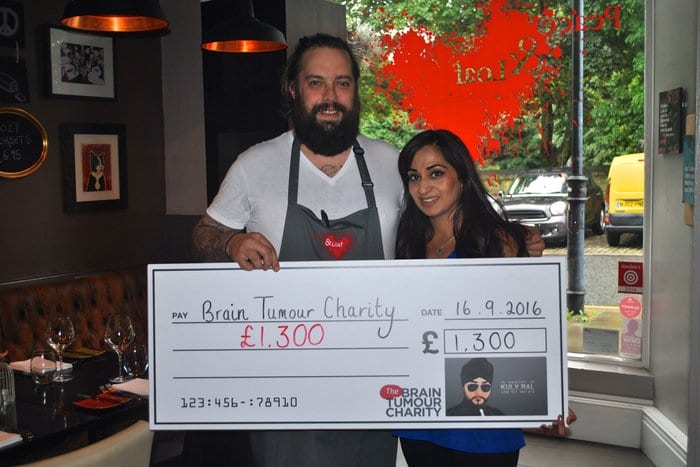 A Newcastle restaurant is celebrating, after raising nearly £2000 for charity as part of their latest regular fundraising event this month.

Jesmond based Peace and Loaf raised £1,300 for The Brain Tumour Charity with their ‘Back to Front’ event, which saw kitchen staff – including Masterchef: The Professionals’ Dave Coulson – take to waiting tables and vice versa.

The cause is especially close to the eatery’s co-owner and director Geeta Ral, whose late husband Kuly sadly passed away from a brain tumour in 2012. She says she is proud of the staff for what proved to be a hugely successful night.

Geeta said the night wouldn’t have been possible without the backing of her incredible team both in the kitchen and front of house:

“It’s been a massive success and I think every bit of credit has to go to each and every staff member who has helped make it such a memorable night and sacrificed their tips from the night for the cause – from the waiting team who handled the kitchen so well to the kitchen staff who really excelled in making sure guests were tended to.”

Geeta continued: “The guests deserve a lot of credit too for their donations through the night, as well as making the event a special and successful one.

“We have been fundraising continuously by selling bandanas and having charity boxes in the restaurant, as well as selling our Charity Margarita, where we donate £1 from each glass sold – making up a further £697 for The Brain Tumour Charity to add to our back to front event total.”

Geraldine Pipping, The Brain Tumour Charity’s director of fundraising, said: “We are immensely grateful to Geeta for her determination to help others in the face of her own loss.

“We receive no government funding and rely 100% on voluntary donations, so it’s only through the efforts of Geeta and others like her that we can work towards our twin goals of doubling survival and halving the harm caused by brain tumours.”

The back to front event follows in the footsteps of March’s ‘Bandanas for Brain Tumours’ in Peace and Loaf’s continued charity work.

Geeta says although it was a lot of fun, it was about more than just laughs.

“It was certainly a great night, with a lot of smiles, but more than that, it feels great knowing we’re helping any little way we can with The Brain Tumour Charity. It’s such a brilliant cause and the work they do is amazing, so to be able to help is really the cherry on top of the cake.”

The Brain Tumour Charity is the nation’s leading researcher into brain tumours and has offered support to over 20,000 people affected by the affliction, and has so far invested over £18m into pioneering research into brain tumours. – the biggest cancer killer of children and adults under the age of 40.