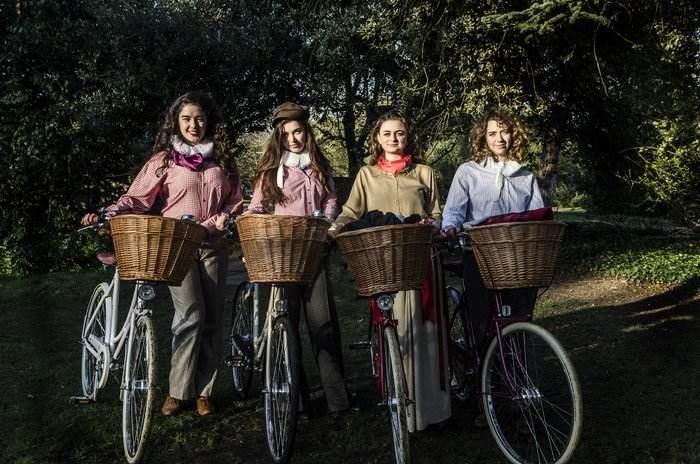 The HandleBards are set to ride into Newcastle on Sunday 14 August 2016 for a side-splitting, bicycle-powered performance of Romeo and Juliet at the Great North Museum: Hancock.

The eccentric theatre company cycles the length and breadth of the country performing Shakespeare’s plays and 2016 – the 400th anniversary of the Bard’s death – has seen the addition of a new all-female troupe who will stop off at the museum as part of their inaugural tour.

The four-strong cast carry all of their set, props and costumes in tow on bespoke, hand-crafted push-bikes, cycling from show to show.

On 14 August, the girls will ride from Wark, Northumberland to give their first ever Newcastle performance on the lawn in front of the historic Hancock building. By the end of the three-month tour, they will have cycled over 1000 miles.

The audience on the night can expect a high-energy adaptation of Shakespeare’s famous tragedy that is charming and chaotic in equal measure with belly laughs thrown in too.

“We began as an all-male company to emulate how things used to be done in Shakespeare’s day. But we live in a different world now. Shakespeare wrote his plays for small casts of the same gender, and we stay true to that – just with a few extra twists and turns here and there.”

“We can’t wait to welcome the HandleBards to the museum and see their riotous show come alive. It’s something a bit different for us but we love the idea of environmentally sustainable theatre. And what could be better than enjoying Shakespeare with a picnic against the classic backdrop of the Great North Museum: Hancock?”

Families, comedy fans, theatre buffs and cycling enthusiasts in particular will love the hilarious show which is suitable for all ages. The UK’s only cycling theatre troupe put it best themselves, however, with a sonnet:

Ride on with us throughout the countryside,
With comedies and tragedies galore;
Four actors upon bikes are wont to ride,
With legs exhausted and with bottoms sore.
A journey thorough bush and thorough briar,
On a-roads, b-roads, cycle-paths we steer.
On pedalled steeds we stow all we require –
Set, props and costumes, scripts and camping gear.
Hey ho! The wind and rain may slow our ride,
Our chains may bear the whips and scorns of grime,
But this dry-witted, wet quartet provide
A stonking, bonkers, entertaining time.
So join this ped’ling Shakespeare troupe anon,
The HandleBards: ride on, dear friends, ride on.

TICKETS
Tickets for the one-off performance start at £8 and can be bought online via the Great North Museum: Hancock website: https://greatnorthmuseum.org.uk/whats-on/the-handlebards-romeo-and-juliet. The performance will move inside the museum in the event of poor weather.