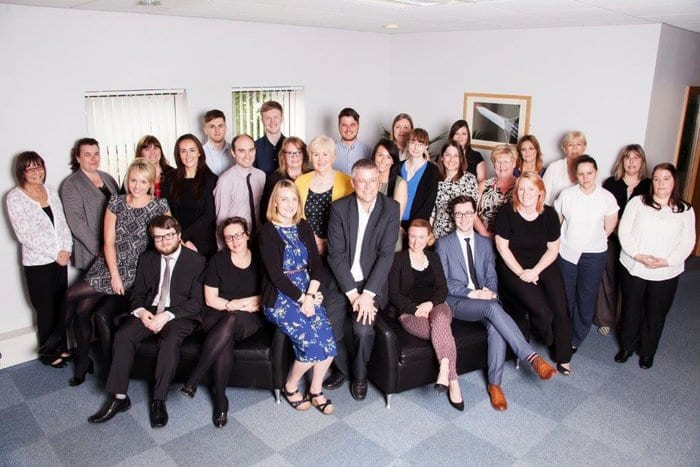 A NORTH EAST law firm is fast tracking its plans for future expansion thanks to rapid departmental growth, which has seen an increase of 1,750 percent in less than a decade.

Following its establishment in 2006, the residential conveyancing team at Gordon Brown Law Firm (GBLF) has grown from just two members of staff to a team of 37, now making up the firm’s largest department and just under half of its 85-strong work force, operating across the length and breadth of the UK.

Most recently the team has seen three new appointments, each working at different levels, as well as apprenticeship training facilitated for two admin support members from the residential conveyancing department, which is based across its Newcastle and Chester le Street offices.

The department handled approximately 500 client files in its first year following its inception by GBLF’s head of residential conveyancing Geoff Hall. In 2015 this figure sat at over 5,000, with Geoff citing the 2008 recession as a milestone it used to its advantage.

Geoff said: “We absolutely saw the 2008 crash as an opportunity. GBLF jumped when other firms didn’t. We looked at equity release on the basis that in a declining market older people would be looking to release this equity in later life as the value of pensions diminished. We also capitalised on the new build purchase market and saw this as an opportunity on which to build the business.”

Geoff has an ambitious vision for GBLF’s future and is planning to significantly increase file numbers further within the award-winning residential conveyancing team. He has also played a key role in ensuring systems and processes are in place to support flexible homeworking via the company’s secure portal, which he believes has aided the firm’s ability to retain and grow its team.

Geoff added: “We couldn’t have predicted the department’s rapid success – as well as contributing considerably to the firm’s overall growth it has also given us the opportunity to bring people on and develop their skill set, which has been tremendously satisfying to see.

“Not only do we plan to continue recruiting, the next five years will see us consolidate what has been achieved to date, enhancing our existing systems within the team and building productivity and turnover whilst always increasing the customer service experience – something which is at the heart of everything we do here at GBLF.”