Pixies Announce New Album And Include Newcastle In World Tour 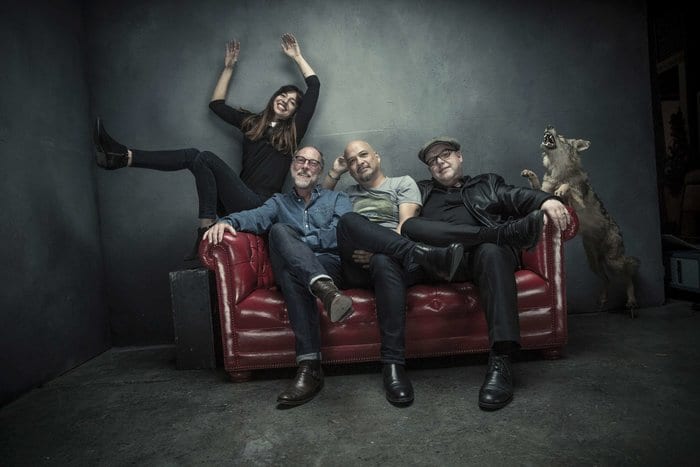 Pixies announce that their sophomore “post-reunion” album, Head Carrier, will be released on September 30 (Pixies Music/[PIAS]).  The 12-track collection of the band’s unique aural mix of surrealism, psychedelia, dissonance and surf rock was produced by Tom Dalgety (Killing Joke, Royal Blood) and recorded at London’s Rak Studios from mid-February through to mid-March this year.  Fans will get a first taste of the new music as placing an album pre-order will unlock an instant-grat download of the first single, “Um Chagga Lagga.”  Featuring original artwork by the band’s longtime art director, the legendary Vaughan Oliver, the album will be available in various formats and can be pre-ordered now; go to Pixiesmusic.com for details and purchasing.

In addition, the band – Black Francis, Joey Santiago, and David Lovering – officially welcome bassist Paz Lenchantin to the Pixies’ permanent line-up.  Lenchantin has been the band’s touring bassist since January 2014, and played an integral part in the recording of Head Carrier.  Her cool and dreamy soprano can be heard singing lead on the track “All I Think About Now.”

A special limited edition deluxe box set of Head Carrier will be available exclusively through Pixiesmusic.com, and will include the CD, the album on heavy-weight/180 grams black vinyl, and a 24-page, oversized booklet with the song’s lyrics and Vaughan Oliver’s evocative, original artwork.  Also available only through the band’s website is a special bundle that includes the deluxe box set, special t-shirt, and a special 12” x 12” record sleeve sized poster.

To support Head Carrier, Pixies will launch the first leg of their 2016 – 2017 global tour with a European run that begins November 15 in Vienna.

Confirmed dates are below; go to Pixiesmusic.com for ticketing info.

TICKETS
Tickets go on sale Friday July 8th and are available from: * ticketweb.co.uk